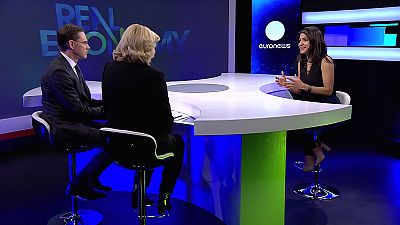 Uncertainty is the new normal for us all. Maithreyi Seetharaman spoke with the European Commission’s vice president in charge of investments, and the commissioner of regional affairs, to talk about one way they suggest Europe can help create jobs by giving confidence to risk averse investors.

The plan? To get risky projects that need money to combine grants given by the European structural and investment funds (ESI Funds) with loans from the European Fund for Strategic Investments (EFSI).

The idea? That as the EU is taking on more risk, the projects it is backing are also worth the private sector’s money.

But unless you are an EU bureaucrat, you may not know the difference between these two very similar sounding funds, or it may be the first time you have even heard of them. So, lets get you up to speed

Maithreyi Seetharaman, Euronews:
“I’m joined now by Corina Cretu, the Commissioner for Regional Policy, the woman managing the massive budget of the structural and investment funds. And, of course, Jyrki Katainen, European Commission Vice-President for Jobs, Growth, Investment and Competitiveness.

“What kind of track record have we seen of structural funds and also of EFSI in actually creating jobs?

Corina Cretu:
“We have an evaluation of what we did with funds for 2007-2013. More than one million jobs were created and I talk now about direct jobs, but of course it can multiply two or three times when we talk about indirect jobs. And we work together to maximise the impact of the fund that we have for 2014-2020, over 600 billion we have for all 28 countries.”

Jyrki Katainen:
“When we adopted EFSI we assessed equation that EFSI’s impact on job creation would be something like 1.3 million new jobs. International Labour Organisation (ILO) says that its impact will be 2.1 million new jobs.”

Maithreyi Seetharaman, Euronews:
“Well on that note, it’s an appropriate time to probably bring in an expert. Our first question is from research scholar Grégory Claeys at the think tank, Bruegel."

Grégory Claeys:
“Can you please explain why regional funds and EFSI funds should be combined given they have very different objectives and very different geographical distribution?”

Corina Cretu:
“It is true that our regulations are different. We already introduced during the review of multi-annual financial framework some changes to make this blending much more easier. Also in cohesion and simplifying cost option and we are working together for the post 2020. The idea is to make much more simpler.”

Maithreyi Seetharaman, Euronews:
“Do you think there is a problem in synergy there?”

Jyrki Katainen:
“It is just according to common sense to blend different financing sources.”

Corina Cretu:
“Of course we have long term, but when its risky it’s a much more solid ground for the investors, for the private investors to come in, having also EFSI, cohesion policy and private investors – it’s a guarantee for them that it’s a strong and solid project.”

Maithreyi Seetharaman, Euronews:
“Are we going to see reductions in the kind of projects or the kind of sectors that get funded by structural funds?Universities, for example.”

Corina Cretu:
“We will invest with priority research and innovation, digital. And we’ll slow down with infrastructure. We know that it is a need especially for Central and Eastern Europe because connection it is very important issue but also we should go hand in hand also for these regions with innovation.”

Jyrki Katainen:
“If I should bet something, I would say that the big chunk of majority of structural funds will remain as grant-based financing also in the future. But, also at the same time I would bet that there are more financial instruments, because sometimes it is more efficient way to use EU or public resources.”

Maithreyi Seetharaman, Euronews:
“I think that’s an interesting point at which I can bring in yet another expert. Mathias Dolls from the Centre for European Economic Research (ZEW) in Germany.”

Mathias Dolls:
“Is there long term vision for the EFSI for the time period after 2020? It has been argued, for example, in the Five Presidents’ Report that the EFSI could be developed to become a stabilisation mechanism for the euro area. Is that a viable option?”

Jyrki Katainen:
“EFSI is not the optimal, because automatic stabilisers, for instance, in member states level means unemployment benefit schemes. When unemployment is rising, subsidies are playing a bigger role. In other words it is stabilising the situation. To some extent we could see that if EFSI is a permanent tool for our member states, then it could address the market failure in less developing countries. I wouldn’t exaggerate the role of EFSI as an automatic stabiliser, but it may play some role in the future.”

Maithreyi Seetharaman, Euronews:
“What does 2017 hold for investment conditions in Europe?”

Jyrki Katainen:
“All the uncertainty which we can see coming from outside Europe, or sometimes even from within, is poison for investments. So, we want to underline the importance of rule-based world economy. Rule-based trade is a way to carve on globalisation, is the way to improve investment environment. This is what we are standing for.”

Corina Cretu:
“I think European Union, as Jyrki said, will remain a main actor in the world with what we will achieve.”

Maithreyi Seetharaman, Euronews:
“On that note, I’d like to thank the two of you for addressing a rather complex topic.”