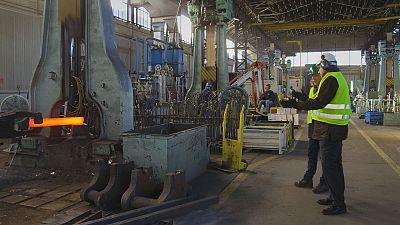 The social and solidarity economy (SSE) is a sector far from being marginal today in Europe. Cooperatives employ about four-and-a-half million people.

There are 180,000 cooperatives in Europe today. They employ more than 4.5 million people.

To better understand why an increasing number of entrepreneurs are using the SSE model, we will look at a cooperative in Paris region that is social, while also being competitive, robust and resilient.

Euronews correspondent Serge Rombi asked France’s minister for social economy Martine Pinville if it was true that France’s SSE sector was a marginal one.

“Absolutely not,” Pinville said. “This represents 10 percent of GDP. It provides more than two million jobs and represents 14 percent of private employment in France.”

In 2050, #cooperatives could contribute 37% of the #electricity by #EnergyCitizens: https://t.co/pz4XdfrS7ppic.twitter.com/5P3THojkLb

Let’s look at an example here in France, just outside Paris.

About 100 people work at a foundry we visited. It has been a cooperative since its creation by Parisian farriers in 1912.

Its annual turnover is 20 million euros. And importantly, this company has always shown positive results.

“Our customers are the big names in aeronautics, space, nuclear and oil, and today, with more than a century of knowledge, we supply them with parts for high-tech equipment,” CEO Jean Lery told Euronews.

Current workers or retired ones, heads of department or the CEO, some employees of the blacksmith are also members. In other words, they are the equal owners.

“We redistribute about 60 percent of our profits to employees,” explained Lery. “That creates momentum, motivation, flexibility, and creates competitiveness for the company.”

Some 25 million euros have just been invested in new machines. The decision was taken, like all other major company decisions, by all members, such as Claude, the quality manager.

“When a company makes a profit, it goes to one or a few people. In a cooperative like ours, all these profits do not go to just one person, but they are reinvested in the company, so we can get ahead,” said Claude Faure, the company’s quality manager.

Union des Forgerons is an example of how the social and solidarity economy can also be competitive.

Martine Pinville explained to Euronews that it is indeed a very competitive economy: “It is a robust and resilient economy that has survived the crisis. This social and solidarity economy has created three times more jobs than the traditional private sector over the last ten years,” she said.

How does our EaSI Guarantee work? Who can apply? How to do so? Find out in our brochure ➡️ https://t.co/feURZAHDPV#SocEnt#microfinancepic.twitter.com/54XWLsVmxP

Cooperatives can be found in many sectors, from banking to green energy, health, education, agriculture and insurance.

There are 180,000 cooperatives in Europe today. They employ more than four-and-a-half million people.

The social and solidarity economy is not only in France. Pinville said: “And we wanted to create a European dynamic, with other European countries and the European Commission.”