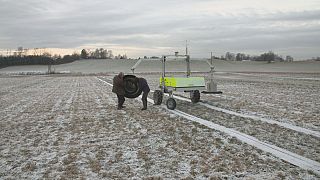 In this a patch of experimental farmland in Oslo, a robot measures the emissions of a gas that has become particularly harmful to the environment, nitrous oxide (N2O). Researchers have developed a prototype to fight this greenhouse gas.

The widespread use of nitrogen-based synthetic fertilizers has considerably increased emissions.

Farmlands are one of the main sources of nitrous oxide, better known as “laughing gas.” It is nearly 300 times more effective in trapping heat than carbon dioxide.

European scientists are studying how to fight this gas which contributes to about 10 percent of global warming and depletes the ozone layer. This robot allows them to assess theories developed in laboratories.

“If you want to prove that a particular soil management is reducing the N2O emissions, you have to measure N2O emissions from the soil over and over again, day after day, after day… throughout the whole season, and the reason is that the N2O emissions fluctuates from day to day enormously,” Lars Bakken, Environmental Scientist, Norwegian University of Life Sciences, explained to Euronews.

“We lower a chamber like this onto the ground and measure for three minutes the concentration inside the chamber,” he added.

Measurements are usually taken manually, which is time consuming. Here all data are automatically saved.

“The point is to make it completely automatic, and just collect the data, because, we need masses of data,” said Lars.

N2O formation is a natural bacterial process. Yet, the widespread use of nitrogen-based synthetic fertilizers has considerably increased emissions.

Researchers want to learn how some microorganisms in the soil, and one specific bacteria, are capable of both making and absorbing gas.

“We see some bacteria being responsible for N2O production only, we see some that have abilities to reduce N2O,” Pawel Lycus, Microbiologist, Norwegian University of Life Sciences, told Euronews. “But the vast majority of the cells in soils are the one that can both produce and reduce (N2O). And the aim of our studies was to improve our basic understanding, on a very basic molecular, biochemical level, how is the process of N2O production and reduction driven?”

One of the aims therefore is to try to domesticate the bacterium, in other words to stimulate its ability to produce the enzyme nitrous oxide reductase that destroys N2O.

“It is a very peculiar protein, since today it is the only one known that is able to destroy the nitrous oxide,” explained Manuel Soriano-Laguna, Biochemist, University of East Anglia. “As you see here, in the centre of the protein, there are copper atoms that are essential to be able to perform its function (destroying N2O). And we want to study from a biochemical point of view how the bacterium is capable of producing this protein.”

In recent decades, N2O emissions have grown. If the use and composition of fertilizers are crucial factors, so are the characteristics of the soil and the manner of working the land.

“We can maybe improve the performance of the fertilizers, and we also need to work on better management strategies,” said Asa Frostegard, Coordinator, N2ORA Project. “That would include for example keeping the soils aerated, not use excessive amount of fertilizers and another thing is that we have found if we increase the pH a bit of soils, that are a bit acidic, we can strongly reduce the N2O emissions.”

The combination of microbiology, biochemistry and robotics is a vital keys for researchers to meet the urgency of the climate change challenge.