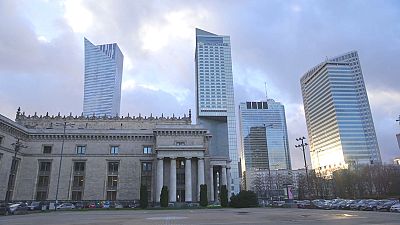 <p>The rising number of successful businesses in Poland is leading to a thriving investment climate, that attracts more and more international and local startups and entrepreneurs.</p> <p>In this edition of Focus, we discover why Warsaw it is among Europe’s top business-friendly locations.</p> <p>Poland’s capital is one of the fastest growing cities in the EU. Businesses are attracted there because of its strategic Central European location.</p> <p>Warsaw is home to many well-known international brands who have recognised its potential.</p> <p>Twenty-five years ago, one of the first global corporations to open a branch in Warsaw was General Electric (GE). </p> <p>Today, GE employs 6,500 local workers and continues to invest in the aviation, energy, medical and IT sectors.</p> <p>“Today after 25 years we know that not only it was a perfect decision but today we even expand because of the human capital is outstanding,” <span class="caps">CEO</span> of GE Poland Beata Stelmach told Euronews.</p> <iframe width="640" height="315" src="https://www.youtube.com/embed/sVImjoeB6tg" frameborder="0" allowfullscreen></iframe> <br /> <p><strong>Business support services</strong></p> <p>Warsaw offers a well-educated workforce as well as investment support to start ups and established businesses.</p> <p>The <span class="caps">NGO</span> <a href="http://startuppoland.org/en/">Startup Poland</a> helps entrepreneurs in the early stages of developing their businesses. </p> <p>“It could be more booming, we would need more exchange of knowledge best practices sharing between and entrepreneur and it is already happening thanks to the meeting facilities, like creativity center where are running Startup Poland global programme,” <span class="caps">CEO</span> Julia Krysztofiak-Szopa<br /> told Euronews.</p> <p>The programme helps start ups who want to boost their business potential by going global. It provides guidance and mentorship and helps entrepreneurs network with other similar businesses internationally.</p> <p>“Warsaw trying to link big brands big companies to get them with the start ups to launch the programs where they are sitting together and they starting to solve the problems, also the problems some times the problems which we are addressing as challenge as a city,” Warsaw Mayor told Euronews.</p> <p>“The main reason why to come to Warsaw to set a business with in the few next years the good accessibility of the market , good and well educated work force and the good infrastructure that you have in the city which improve the quality of living,” he added.</p> <blockquote class="twitter-tweet" data-lang="en"><p lang="en" dir="ltr">Yerevan here I come! See you in the morning! (at Warsaw Chopin Airport) <a href="https://t.co/slMRlTCc0B">pic.twitter.com/slMRlTCc0B</a></p>— Borys Musielak (@michuk) <a href="https://twitter.com/michuk/status/807700113959305216">December 10, 2016</a></blockquote> <script async src="//platform.twitter.com/widgets.js" charset="utf-8"></script> <hr> <p><strong>Central European city of culture</strong></p> <p>Warsaw, the city where Polish composer Chopin was born, is rich in culture and rates highly in a world ‘quality of living’ index. </p> <p>The city has one of the largest hospitality markets in Poland, for both leisure and business tourism.</p> <p>More than six million people visited last year.</p> <blockquote class="twitter-tweet" data-lang="en"><p lang="en" dir="ltr">How 2 Irreverent Art Critics Founded Warsaw's Raster Gallery and Helped Create a New Polish Art Scene in the Processhttp://ow.ly/xSyr306NLNB <a href="https://t.co/bBPhISFl8L">pic.twitter.com/bBPhISFl8L</a></p>— Artspace (@artspace) <a href="https://twitter.com/artspace/status/805863132879089664">December 5, 2016</a></blockquote> <script async src="//platform.twitter.com/widgets.js" charset="utf-8"></script> <hr> <p>The Sofitel Hotel’s general manager Philippe Godard has been living in the city for four years. He says he has noticed a massive rise in tourism to Warsaw. </p> <p>“Since 2012, the year of the European football championships, we have seen an keen interest in Warsaw,” Godard said. “An interest for both leisure and business tourism.”</p> <p><strong>European-American fusion</strong></p> <p>At night time, Warsaw has a different charm, especially around Christmas. Phillippe showed us around the city including a place where locals meet up with friends and family. </p> <p>We asked Philippe what he liked the most in Warsaw. </p> <p>“It is an extremely modern city, very open,” he said. “Let me describe it a little for you. Compared with other places, it’s like cities in the <span class="caps">USA</span>.”</p> <p>“It gives you a very interesting mix of an ancient European culture with this modern, American energy,” Godard added.</p> <p>“In Warsaw, everybody goes out, in summer and winter. The difference is that in the summer you’re outdoors and you’re inside for the winter. Tonight, it’s the middle of the week, and the city is full of people and positive vibes. You can feel the life force. Poles are actually very sociable, and in Warsaw people want to discover and connect with other cultures, meet people and get to know them better.”</p> <blockquote class="twitter-tweet" data-lang="en"><p lang="pl" dir="ltr">Warszawo jakie plany na poniedziałkowy wieczór? Widzieliście już iluminację? <a href="https://twitter.com/hashtag/Warszawa?src=hash">#Warszawa</a> <a href="https://twitter.com/hashtag/iluminacja?src=hash">#iluminacja</a> fot. Michał Janiszewski <a href="https://t.co/ZM70bWuCwb">pic.twitter.com/ZM70bWuCwb</a></p>— Warszawa (@warszawa) <a href="https://twitter.com/warszawa/status/805841680897372162">December 5, 2016</a></blockquote> <script async src="//platform.twitter.com/widgets.js" charset="utf-8"></script> <blockquote class="twitter-tweet" data-lang="en"><p lang="en" dir="ltr">Lights abound during the Christmas season in Warsaw, <a href="https://twitter.com/hashtag/Poland?src=hash">#Poland</a> <a href="https://t.co/dJ53z5Ten9">pic.twitter.com/dJ53z5Ten9</a></p>— European Beauty (@MagicalEurope) <a href="https://twitter.com/MagicalEurope/status/809050933883793409">December 14, 2016</a></blockquote> <script async src="//platform.twitter.com/widgets.js" charset="utf-8"></script> <hr>