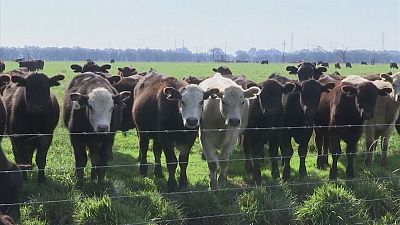 Methane gas is all around us and is threatening efforts to slow climate change. An international study led by the French organisation the Laboratory of Climate Sciences and the Environment – the LCSE – reported that methane concentrations in the air began to surge around 2007 and grew precipitously in 2014 and 2015.

Methane can come from many different sources, including natural ones such as marshes and other wetlands, but about 60 percent comes from human activities, notably agriculture and waste which represents 36 percent of that figure.

While it is not fully clear what is causing the recent surge scientists believe it has do with agricultural practices. In California for example farmers and landfill operators must now comply with a legislation aimed at tackling heat trapping gases.

“We can reduce emissions of methane, we can really help to slow global warming. It’s the second most important greenhouse gas globally, as well as in California. So it’s an important driver. And there are some concentrated sources of methane in the state, at dairies, at landfills, oil and gas production facilities,” explained Ryan McCarthy, scientific advisor, California Air Resources Board.

Californian farmers are expected to reduce methane emissions from dairies and livestock operations to 40 percent below 2013 levels by 2030.

That can be done for example by using methane digesters, which capture methane from manure in large storage tanks and convert the gas into electricity.

Regulators are also looking for ways to reduce so-called enteric emissions, that’s methane produced by bovine digestive systems. That could eventually lead to changes in what cattle eat.

Methane is much less prevalent in the atmosphere than carbon dioxide (CO2) – the main man-made greenhouse gas – but is more potent because it traps 28 times more heat. The report did not say to what extent methane contributes to global warming.

CO2 emissions are expected to remain flat for the third year in a row in 2016, thanks to falls in China, the Global Carbon Project said last month.