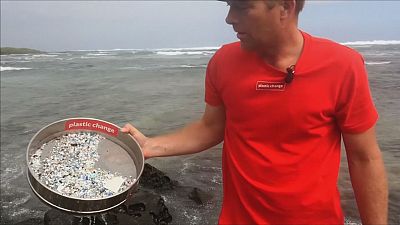 Every year 8 million tons of plastic waste are being dumped into the seas.

A team of researchers has collected data in the Pacific Ocean in order to track the routes taken by floating plastic debris. The “international organisation – “Plastic Change”“:http://plasticchange.org/ wants to raise awareness over the increasing pollution by plastic of our oceans.

Researchers sound alarm over millions of tonnes of plastic dumped into oceans https://t.co/MP9qHAqimpCBC</a> <a href="https://twitter.com/PlasticChange">PlasticChange#plasticpollutionpic.twitter.com/FNyPacPcFz

Plastic is not biodegradable, but at sea large pieces of plastic can break into smaller bits which are easy for animals to eat.

“One of the reasons that we do this particular research is that we want to try to help answer the question, where is all the plastic that should be found on the surface of the oceans but isn’t there?

‘So over the last decades, we have exposed our oceans to so much plastic and we have relatively good calculations of how much plastic that is. And what we can see is that there is only a tiny bit of what should be out there is what we find on the surface,” explained environmental biologist Kristian Syberg.

Microplastics are particles from larger items made brittle by sunlight and pounded to pieces by waves, bitten by sharks and other fish or otherwise torn apart.

“Wind and sea currents gather plastic debris in the so-called gyres, spun by currents and floating in the oceans and seas:http://www.unep.org/regionalseas/marinelitter/publications/docs/plastic_ocean_report.pdf .

“There are several hypothesis of where the remaining part of the plastic can be. It can be different, at different depths in the water column, some of it might have sunk to the ocean floor, some might have entered the food chain,” environmental biologist Kristian Syberg added.

The pieces of micro-plastic are just the tip of the iceberg. The ocean works like a blender and it’s crunching the plastic down to these smaller pieces.

According to researchers, the amount of this kind of debris in the ocean is likely to double within the next ten years while pieces of the plastic keep on returning to land, after travelling thousand of kilometers on the water.

Kamilo Beach, on the southeast coast of the island of Hawaii, is well known for its accumulation of plastic marine debris.

Items found on the beach prove the ocean pollution is a global issue. Experts have sounded the alarm over how plastic pollution kills a huge numbers of seabirds, marine mammals and destroys ocean ecosystems.

Plastic objects like discarded fishing nets, kill by trapping dolphins, sea turtles and other marine animals. Pieces of plastic frequently get stuck in the throats and digestive systems of marine animals.

‘So our best bet is to reduce this problem or to prevent future entanglement , just to come down here and get as much debris off the beach as possible,” said Megan Lamson, Programme Manager of Hawaii Wildlife Fund.

Scientists have estimated that there are over five trillion pieces of plastic weighing more than a quarter of a million tons floating across the sea.

Over 600 species of marine life are suffering directly from plastic pollution and over 90% of seabirds worldwide have plastic pieces in their stomachs researches believe.

There is expected to be more plastic than fish in the sea by 2050.