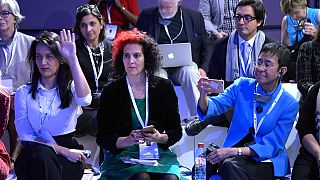 Uber is one of the major players in the sharing economy. It wants to get more women behind the wheel, arguing it is opening up the traditionally male-dominated world of taxi drivers. But critics say the company behind the ride-sharing app is merely creating more precarious jobs.

Striking the balance between responsibility and profitability was one of the discussions at the Women’s Forum in Deauville, with it’s focus on the so-called sharing economy.

Democratising, dotcommunism, dystopian – these are just some of the ways the sharing economy has been described. It is valued at 15bn euros globally and could be as much as 335bn euros by 2025. But what about the promises of making the world a fairer, greener and more socially-connected place?

With the ubiquity of smart phones came the rise of the app-based sharing economy, and with it a revolution in the world of work. There is vigorous debate over the creation of lots of low-paid, part-time jobs at the expense of benefits and security – arguably levelling the playing field between women and men.

“Women have traditionally been the ones who are in these types of jobs, even in a traditional company, who don’t have the same guarantees of security,” explained Giana Eckhardt, Professor of Marketing at Royal Holloway, University of London. “Now that a much larger sector of the population is also in this situation, you could argue that what women have had to deal with for a very long time, now men are as well.”

Everything from cars and bikes, to toys and power tools are being shared, so environmental benefits should follow. However, many green claims of the sharing economy appear to be anecdotal, it something that Benita Matofksa, Founder, The People Who Share says needs to be addressed.

“There is some data about what car sharing means. Household carbon emissions can be reduced by 37% through car-sharing and we know for example that there are 3.7 trillion pounds worth of idle resources in the world. So we have some idea about the kind of social and environmental impact this is creating, but actually in terms of putting a number on that social and environmental value is something that we need to do responsibly.”

Aside from saving money or the environment, the sharing economy could hold other benefits. Social scientists are looking at how sharing for sharing’s sake can create social capital, something which doesn’t show up in GDP.

“Those activities can have a real impact on people’s wellbeing and this question highlights something that social scientists have been saying now for quite a while which is that wellbeing and GDP are increasingly diverging and we need a better measure of economic wellbeing,” explained Juliet Schor, Professor of Sociology, Boston College.

As the sharing economy evolves it could be argued women may be best placed to combine profits with purpose.

“No one knows what is going to happen, neither the man nor the woman,” explained Clara Gaymard, President, Women’s Forum for the Economy & Society. “But they can play because it’s a horizontal world. It’s less hierarchical, you can push the boundaries. So it’s a tool that is given to women to get empowerment and act the way they want and they have to be players of this game.”

So it seems the sharing economy is here to stay. What’s not clear is which direction it will take. Far from being the death knell for capitalism, it is opening a new chapter in which women could redefine the world of work, and maybe even become the dominant players.