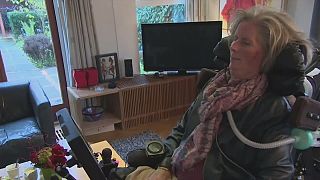 Hanneke de Bruijne is a mother of three.

In 2008 she was diagnosed with amyotrophic lateral sclerosis (ALS) also known as motor neurone syndrome.

It is a progressive neurodegenerative disease that affects nerve cells in the brain and the spinal cord. British physicist Stephen Hawking also suffers from the condition.

New research now allows patients to communicate thanks to an implant inserted into the brain.

Hanneke de Bruijne, a 58-year-old from the Netherlands, was diagnosed with the degenerative disease in 2008.… https://t.co/uDDrw7tRet

Eventually as muscle wastage affects their ability to breathe some patients eventually need to be ventilated to survive.

The symptoms of the disease are often referred to as ‘locked in syndrome’ because of the isolation it imposes on people.

The team at the Brain Centre in Utrecht have created a platinum device consisting of sensors connected by wires to an amplifier equipped with electronics, batteries and wireless transmitter.

Nick Ramsey is a neuroscientist at the University Medical Centre, Utrecht:“So the electricity goes up when I move my hand it’s the same for someone who is paralysed. Electricity will go up but since the nerves are broken the motor nerves she can’t move, but the electricity still goes up. So when it goes up the signal is going into this sensor, it goes all the way down so basically these go underneath the skull and the wires are under the skin over here and this goes under the skin. So it’s completely inside the body no risk of infection after surgery.”

The implant works by reading brain activity from the implanted electrodes and sending a signal down a wire to a device which looks like a pacemaker.

This device communicates by wireless to a computer converting the signal to a click.

When she wants to choose a letter, Hanneke imagines she moving her right hand to create the signal.

According to Ramsey they have managed to overcome obstacles such as ensuring the software avoids responding to involuntary signals.

Nick Ramsey continues:“It’s the fact that you need this special computer software to choose letters. That’s the limiting factor: basically ninety percent of the time she is waiting until the right part of the screen lights up so she can click it. That’s something that you can improve a little bit, but you can’t make it much faster.”

Based on her results the Utrecht team says it is now hoping it will be able to reduce the time spent in surgery and improve the software.

They plan to expand the study to two more patients, if the improvements are significant the researchers hope they will be able to set up a multi-centre trial with implants for twenty patients.