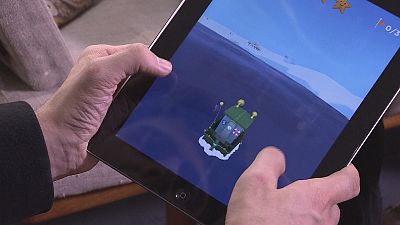 <p>A mobile game that challenges a gamer’s spatial navigation has generated the <a href="https://www.theguardian.com/science/head-quarters/2016/may/19/sea-hero-quest-mobile-game-dementia-alzheimers-disease-spatial-navigation">largest-ever dementia study</a>.</p> <p>More than 2.4 million people have played ‘Sea Hero Quest’ since it was launched in May, generating the equivalent of more than 9,000 years’ worth of lab-based research. </p> <p>It has shown scientists that human spatial navigation – crucial to understanding dementia – begins declining during teenage years.</p> <p>“People play the game, with a little boat, they have to go from a starting point, down a river, pick up a flare gun and shoot it back to where they started. So there’s a sense of direction, where have they just come from? And we get a measure of accuracy, so someone who’s very good at that, eight out of eight questions we would ask on this, they would get them all right. But someone who’s finding it very difficult would not get them right, they’d make mistakes. And so what we’re able to see across the lifespan, with people telling us how old they are and matching that with that performance, we can see whether that performance changes with age and that’s what we find: we find that people are more accurate, the younger they are,” explains Hugo Spiers, neuroscientist at University College London. </p> <p>The data also revealed differences in spatial navigation abilities between genders as well as countries, with Nordic countries coming out on top.</p> <p>The goal was to identify the normal range of navigation skills among humans, and to then use this to develop a chart to profile people and spot dementia early through any deviance from the norm.</p> <p>“This tells the physicians that if they’re able to, in the future – when we’ve gone down many steps in the future – develop a diagnostic tool. It would allow someone to take part in a test, to see how good their sense of direction is, get a score out of that test and then compare it to a very large sample, 2.4 million people potentially, to say, ‘Where do they fall? Are they very good or are they actually at the lower end of their performance?’,” says Dr Spiers. </p> <p>Different brain areas are connected by a circuit, which we use to navigate. One particular area creates an internal map in our heads – and the game helped confirm it’s this part of the brain that deteriorates first in people with dementia according to the researchers. </p> <p>Getting these sorts of results from laboratory experiments using Magnetic Resonance Imaging (<span class="caps">MRI</span>) or Computed Tomography (CT) scanners is time consuming, limited in numbers and expensive.</p> <p>The information generated by people who played the game has produced a huge amount of meaningful data, according to Alzheimer’s Research UK, a charity that <a href="http://www.dementiablog.org/sea-hero-quest/">encouraged people to take part in the project</a>.</p> <p>“The ability for tens of thousands of people to play this game actually means that we are accelerating the research into dementia. So to be able to do the research in the lab could take hundreds of years – to be able to capture the amount of data that we’re able to do using this game. So I think it’s incredibly important that it’s about research, because ultimately, research is the only thing that’s going to deliver on finding a treatment,” says Alzheimer’s Research UK chief executive, Hilary Evans. </p> <p>Experts from University College London stress that the game does not diagnose the disease and that spatial navigation is just one of several useful elements for doctors.</p> <p>“This is one part of a number of different pieces of information that doctors would need to help make diagnoses. It’s important because it’s the first reported symptom, patients with Alzheimer’s, dementia, tend to say, ‘I got lost, I didn’t know I’d lost my sense of direction.’ So it will be very valuable for the clinicians to have a measure for how someone is doing on that ability,” says Dr Spiers. </p> <p>In the <a href="http://edition.cnn.com/2016/05/04/health/dementia-game-sea-hero-quest/index.html">next stages of the project</a>, researchers would like to have volunteers play the game while having their brains scanned in order to see which parts are active and link this to patterns seen in the population worldwide.</p> <p>There is currently no cure for dementia, which affects millions of people around the world.</p>

Going back in time: Warehouse takes Alzheimer's patients back to 1950s