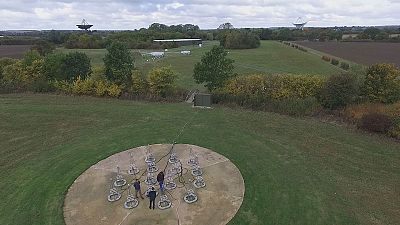 From the ocean depths to the vastness of the cosmos, new technologies give scientists a better understanding of the world around us. In this special episode of Futuris, we will meet with modern explorers of the sea, land, and space.

After a long voyage in the Atlantic, the research vessel docks in Malaga. Its international crew spent a month away from solid ground to study the ocean and its fragile ecosystems.

“The ocean is changing in many ways: the ocean is becoming more acidic over time, it’s getting warmer, just as the globe warms, but also the currents that flow through the ocean are changing. We need to understand that better,” explained J. Murray Roberts, Professor of Marine biology, University of Edinburgh, ATLAS project coordinator.

Marine scientists say this rate of change is unprecedented in geological history. A European research project mapped out 25 expeditions in and around the North Atlantic to fill the gaps in our knowledge.

“This was the first time we went this deep – and this ROV allowed us to get unique images, we could visit sites that were never before seen by human eyes, and that allowed us to study the distribution of organisms and composition of the communities, which tells us more about the functioning of this ecosystem,” said Covadonga Orejas Saco del Valle, Marine ecologist, Spanish Institute of Oceanography.

“You can’t understand the deep seabed if you can’t go there. The ROV are the hands and eyes of researchers on the deep-sea floor, so we can survey large areas in high definition, and we can take, very carefully, samples of the animals that live there,” opined J. Murray Roberts, Marine biologist, University of Edinburgh, ATLAS project coordinator.

The eu_atlas</a> project studies the ocean using a range of hi-tech tools, including autonomous underwater drones – <a href="https://twitter.com/jmurrayroberts">jmurrayroberts explains pic.twitter.com/syRKlf1NtG

Samples from key biodiversity areas will help to understand genetic links between marine organisms in the Mediterranean sea and the Atlantic ocean.

“These are the sites that are critically important to understand and to protect. The information on the links between the populations is absolutely necessary to plan good management of underwater genetic resources at the European level,” said Joana Boavida, Marine biologist, Ifremer

This new knowledge will help us understand how oceans will react to the ongoing climate change and the emerging industrial exploitation of deep sea floor resources.

25 research cruises study the Atlantic Ocean in the eu_atlas</a> project; coordinator <a href="https://twitter.com/jmurrayroberts">jmurrayroberts explains the immensity of the task pic.twitter.com/RJZvHGx5RB

Mapping the future of agriculture

With new technologies, we can take a fresh look at agriculture, to try to make it more efficient and environmentally friendly. Futuris went to Ukraine, one of the study sites of another European research project.

A drone carries a special camera to take high-resolution images of agricultural lands. Controlled by a computer, it flies autonomously, bringing back much more detailed photos than those taken from space satellites.

“We are analysing very detailed drone images that clearly indicate which culture grows where. We can produce a classification map by feeding this validation data into the model,” explained Mykola Lavreniuk, Researcher in artificial intelligence and machine learning, Space Research Institute of NASU-SSAU

These Ukrainian researchers use autonomous drone to take aerial shots of agricultural lands, making a convenient map – coming up in #Futurispic.twitter.com/G1f6CElB12

“We want to know the status of the culture – how it rises, how it grows, how it’s doing through the cultivation period, to bear the best possible harvest,” Bohdan Yailymov, Researcher in satellite imagery processing, Space Research Institute of NASU-SSAU.

The team from the Space research institute have studied more than 5000 fields across Ukraine. They fill all the images into this software model that uses artificial intelligence algorithms to combine various data into a single map of agricultural lands.

“Since we have a large volume of imagery data, we need to process them automatically. To do this, we develop intellectual methods, models, which simulate data recognition capabilities of the human brain. This computer system automatically recognises and classifies the types of the land surface and main cultures that grow on agricultural fields,” said Deputy director Nataliia Kussul, Space Research Institute of NASU-SSAU.

Tested in various countries on several continents, this system can provide data on agricultural production across the world, helping to forecast harvests and reduce spikes in food prices at a global level.

“We test different techniques – crop mapping, agricultural statistics, production monitoring – but also the environmental impact of certain agricultural changes – over these sites. Based on the results of these sites, we get more robust techniques that we can then implement on a global scale,” explained Sven Gilliams, SIGMA project coordinator.

Radio telescopes reveal increasingly distant parts of the universe. The bigger a telescope, the more sensitive it is. In Cambridge, scientists are designing an observatory on a transcontinental scale.

This antenna field is a prototype of the world’s largest radio telescope, set to be built in Australia and South Africa. The SKA – Square Kilometre Array – will use sets of stationary antennas, scattered across enormous distances.

“These metallic arms which look like a Christmas tree are collecting photons from the sky and transform them into electric current that mounts through the antenna into its top part which holds the electronics. Here, in this white box, we have the electronics which collect this electric current from the antenna and amplifies it so that it can be studied by our supercomputers,” explained Eloy de Lera Acedo, Radio astronomer, University of Cambridge.

Combining small antennas into an array produces results similar to building an enormous dish telescope, at a fraction of the cost.

“The SKA really represents the next phase in the evolution of radio astronomy. The plan is to build two telescopes, one a low-frequency component, a dipole antennae similar to the ones you see here – in fact, 130,000 of these,- as well as the mid-to high frequency array of dishes, roughly two hundred in South Africa,” said Jeff Wagg, Project scientist, SKA Organisation.

When operational by early 2020’s, the SKA is expected to reveal a wealth of new data on fundamental atomic constituents of the Universe – all the way back to its very beginning.

“Imagine the ability to create a 3-dimensional movie of the evolution of gas, and how structure evolves in the Universe, from that very early time roughly 1 billion years after the Big Bang to the time we see today, galaxies like our own Milky Way,” continued Jeff Wagg, Project scientist, SKA Organisation.

Building world’s largest telescope is a challenge in many ways, including the logistics. The 130 thousand antennas for the Australian part of the SKA were engineered to be inexpensive, easy to assemble and extremely durable.

“All the electronics inside the antenna should be protected from the sand which can get inside the antenna; and the mechanical design of the antenna is sufficiently sturdy to sustain winds of more than 160 km/h, and other challenges of the desert weather,” said Eloy de Lera Acedo, Radio astronomer, University of Cambridge.

SKA telescopes in Australia and South Africa will function as a single transcontinental observatory. Processing the signals from each individual antenna in real time will require unprecedented computational power.

“That will be, basically, two giant supercomputers – one at each SKA site, which are as big as the current number one world supercomputer, or bigger, in fact. The data rate coming into the Science Data Processor for SKA is bigger than the total world Internet traffic – so we’re talking a huge system here.” said Rosie Bolton, Project scientist for Science Data Processor, University of Cambridge.

This scientific instrument in the Netherlands gives a better idea of how SKA will function. With a total of 40,000 antennas, LOFAR – “Low frequency array” – is currently one of the largest of its kind in the world.

“In the central area of LOFAR there are some 25 stations, and there are more stations around the Netherlands, and then we also have international stations, in Germany, in Poland, in Sweden, in France, in the UK, and soon we’ll have one in Ireland too,” explained Michiel van Haarlem, Head of NL SKA Office, ASTRON.

Optical fibre cables connect the LOFAR core and the remote stations to the central processing facility, where all the signals are combined to produce the maps of the sky.

“The long baselines that are created with these international stations give you the sharpness, the ability to see fine details on the sky, which you don’t have if you have all the stations that are packed close together,” said Michiel van Haarlem, Head of NL SKA Office, ASTRON.

To focus on a specific spot in the sky, researchers designed computing boards that combine signals from each of the individual antennas, syncing radio waves that come from a particular direction.

“All the signals in the certain location of the sky are added coherently, so they are in the same phase, they add up really nice, and other locations average out,” Gijs Schoonderbeek, Instrument Engineer, ASTRON.

The SKA will transport its incredible amounts of data through countless fibre optic links. Commercial devices of this type cost around 1000 euros each. Instead, researchers designed a simpler low-cost solution that fits a standard USB port.

“We have reduced the price to something like 25 euros per link, so that’s a substantial reduction, and this is the type of the technology that you get – a small pluggable module doing the task that we want it to do,” said Peter Maat, System Researcher, ASTRON.

In few years time, the world’s largest telescope shall extend across 3,000 kilometres, surveying the sky ten thousand times faster than ever before, providing astronomers with an instrument of unparalleled resolution and sensitivity to find out more about the universe in which we live.