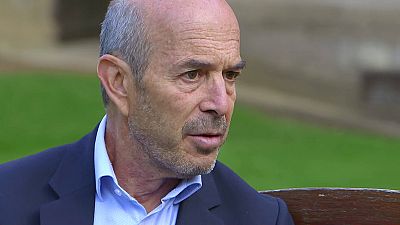 Maithreyi Seetharaman, Euronews: “What can refugees do then to alleviate the worries of people who are going to host them..because you never hear the other side?”

Ian Goldin: “Refugees can do a great deal. I mean first and foremost of course the overwhelming majority of refugees are law abiding and just desperate to lead a decent life and we need to respect their needs.

“But their ability to learn the local languages, to ensure their skills are applicable, to respect the customs and laws of the country they’ve arrived in is absolutely vital too because we are their hosts and its important that they always remember that.

“It’s very important to recognise these concerns and deal with them. We have to respect both the rights and responsibilities. The rights are that people should be treated fairly; responsibility is that they respect the laws of the land.

“Well, many of these people are incredibly skilled and of course they are also very brave. What they’ve gone through is just quite extraordinary and often out of extreme circumstances.

“So I think, they, many of them work in occupations where they are over qualified to do the jobs and that requires a lot of patience a lot of dignity for people to do that..and we do see that they do do this.