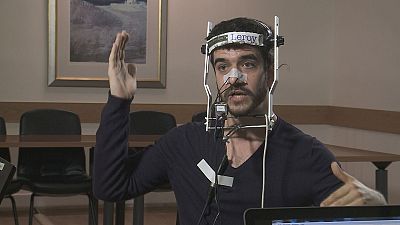 <p>What will come – as time goes on – of traditional dance, folk music, of the cultures of the people? </p> <p>To prevent their disappearance, a <a href="http://i-treasures.eu">European research project</a> – in Thessaloniki in Greece – is establishing a digital database, fully dedicated to intangible cultural treasures of humanity.</p> <h3>Intangible heritage</h3> <p>Monuments, buildings, statues. They’re not the only cultural assets. </p> <p>There’s also <a href="http://www.unesco.org/culture/ich/en/what-is-intangible-heritage-00003">intangible</a> cultural heritage, knowledge, traditions, arts passed on from generation to generation. </p> <p>It’s more difficult to document and decode.</p> <p>“Here we use the new technologies to analyse the movements in order to record the skeleton data of the dancer,” explained <br /> Cosmas Dimitropoulos, an engineer at the Centre for Research and Technology, Hellas, as technology tracked a group of dancers.</p> <p>“After that we model this information to understand the different positions of the dancer.”</p> <p>Researchers believe they’ve found a way to analyse and measure many aspects of physiology related to artistic production – using sensor technologies and processing their signals. </p> <p>“We’re going to create this data and, later analyse the results and then share this information with students,” said Dimitrios Manousis, a teacher at the University Ecclesiastical Academy of Thessaloniki.</p> <p>Acquiring data of different origins and quality allows the researchers to create typical models for each traditional creative expression analysed. </p> <p>It makes it possible to explore new fields of art. </p> <p>“There are two piezo pick-ups on my nose, which are there to detect vibration and nasalisation,” said musician Paul Vignes, explaining the technology he’s wearing.</p> <p>“There is a camera that records the movement of the lips, a microphone that takes the sound data. And then an ultrasonic sensor, to see the movements of the tongue.”</p> <p>Following the same scientific approach, the project has developed an innovative way to conceive new musical instruments.</p> <p>“The idea is to be inspired by the pianistic gestures to create a wide range of sounds without being obliged to use intermediary mechanisms that cause interference between gesture and music, such as keys, strings for the guitar, etcetera,” said Sotiris Manitsaris, from the Ecole Nationale Supérieure des Mines de Paris (<span class="caps">ENSMP</span>).</p> <p><span class="caps">UNESCO</span> has warned that intangible cultures can quickly shrink under the weight of increasing globalisation. </p> <p>So can an answer – and help – come from new technologies?</p> <p>“The project aims to contribute to this, using new information technologies to record, analyse, visualise and share cultural heritage,” said Nikolaos Grammalidis, an engineer at the Centre for Research and Technology, Hellas. </p> <p>“In particular, targeting applications for education and research.” </p> <p>A digital archive of intangible arts can not only be useful in academic circles and training, but also in the field of economics – and to stimulate business initiatives. </p> <p>“As we’re doing in this project, the goal is to be able to share and model, and be ready for various of industries – tourism and education, for example,” explained project advisor Marinos Ioannidis, from the Cyprus University of Technology.</p> <p>The digital archive of intangible cultures is set to give future generations lots of data – helping to keep their traditions and identities alive.</p>