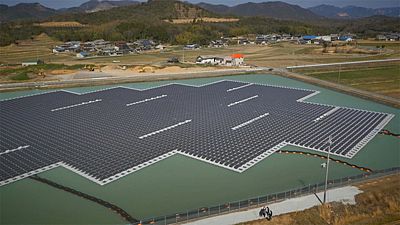 <p>The market for renewable energy is experiencing a real surge in Japan and should continue to develop.</p> <p>What opportunities are there for European companies, and the technologies needed by the Japanese?</p> <p>To get a better understanding of the situation, we have come to the outskirts of Kobe, to this floating solar panels power plant. The electricity produced in this way is then sold back to the principal providers. This technology was developed here in Japan to an industrial level by a French <span class="caps">SME</span>.</p> <p>“Firstly, Japan is a country where the cost of buying back electricity is very high,” said <a href="http://www.ciel-et-terre.net/">Ciel et Terre Japan</a> Sales Manager Neige Breant. “Furthermore the amount of sunshine is excellent. Then, it is a very mountainous country making it very complicated and costly to install solar power plants on land, whereas there are tens of thousands of areas of water. This is a tremendous potential for floating solar plants.”</p> <p>What attracted the Japanese is of course that the product is particularly innovative, but it also respects the environment and is easy to install.</p> <p>When it came to Japan, this <span class="caps">SME</span> formed several partnerships. For example, with the giant <a href="http://www.kyocerasolar.eu/">Kyocera</a>, which especially produces photovoltaic panels.</p> <p>“They had some very good results with their system of floating solar panels,” explained Kyocera General Manager Toshihide Koyano. “We knew they had already completed some very successful projects in Japan. We immediately decided to work with them.”</p> <p>In order to finance its projects, the French company also teamed up with one of the biggest business investors in the country. A particularly rewarding collaboration.</p> <p>“We have invested in several developments with them in the past two years,” revealed <a href="http://www.ctl.co.jp/english/">Century Tokyo Leasing Corporation</a> General Manager Hiroaki Ogino. “They told us that they had bigger projects on an international level. We decided to gamble on them and became 15% shareholders of the company.”</p> <p>To date, the French <span class="caps">SME</span> has installed around 20 plants in Japan. The latest will be operational in a few months and it should make an impression.</p> <p>“From September we will be building a plant on the Yamakura dam near Tokyo: a plant with a capacity of 13,7 megas,” explained Ciel et Terre Japan President Hajime Mori. “Here, you see, it is 1,2 megas. It will be 12 times bigger. It will be the biggest one in Japan, and even in the world.”</p> <p>For this company, as for others, the experience and credibility gained in Japan, also has the advantage of allowing them to get new international contracts.</p> <p><strong>Liberalisation of the electricity market</strong></p> <p>The liberalisation of the electricity market will happen here next month. That means that the Japanese, who are very aware of renewable energy, will be able to choose their provider. According to specialists, that means there will be a large increase in solar power offered by companies.</p> <p>Solar power was particularly well represented this year in Tokyo at the annual renewable energy exhibition. We should add that, by the end of this year, this country will become the largest market for solar energy after Germany.</p> <p>That said, according to this expert, other energies are rapidly developing. Japanese automobile constructors, for example, are placing their bets on the hydrogen car.</p> <p>Biomass and wind turbine energies are also areas to explore, especially for European companies.</p> <p>“They have a lot more experience in terms of operating projects,” said Bloomberg New Energy Finance expert Ali Izadi-Najafabadi. “They can get better capacity factors out of their projects as a result of those operations. If they come and form partnerships with Japanese developers, there are good opportunities for both sides.”</p> <p>During the COP21, Japan proposed to reduce its <a href="http://www.eco-business.com/news/japan-pledges-to-reduce-greenhouse-gas-emissions/">greenhouse gas emissions by 26% by 2030</a>, compared to those in 2013. An undertaking which could boost the renewable energy sector.</p> <p><blockquote class="twitter-tweet" data-lang="en"><p lang="fr" dir="ltr">Quand Ciel et Terre, PME <a href="https://twitter.com/hashtag/FRA?src=hash">#FRA</a>, construit un nouveau concept de centrale solaire flottante <a href="http://t.co/63mgF2dOyr">http://t.co/63mgF2dOyr</a> <a href="https://twitter.com/hashtag/EMR?src=hash">#EMR</a> <a href="http://t.co/rzL2CHOddk">pic.twitter.com/rzL2CHOddk</a></p>— Crowd2Win (@Crowd2Win) <a href="https://twitter.com/Crowd2Win/status/618661299644428288">July 8, 2015</a></blockquote> <script async src="//platform.twitter.com/widgets.js" charset="utf-8"></script></p>