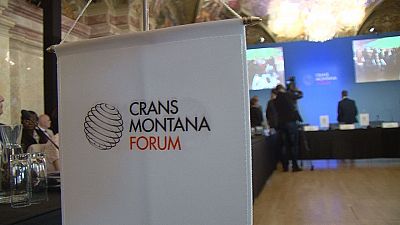 <p>Politicians, business leaders and representatives of international organisations came together in the heart of Vienna, Austria, for the 27th annual Crans Montana Forum. </p> <p>Attendees discussed a wide range of subjects from the role of women in decision-making to renewable energies – the main angle being the rise of central-eastern Europe as a new power – and the migration crisis. </p> <p>One of the most memorable comments was that of Gregory <span class="caps">III</span>, the Syrian-Greek Catholic Patriarch of Antioch and All the East, Alexandria and Jerusalem, who had a – perhaps surprising – view on the reception of Syrian refugees in Europe.</p> <p>“This is a double-edged sword. We are not happy when we hear ‘Syrians welcome,’ because we want them to stay with us at home, especially when we see all the problems they have to go through,” he explained. </p> <p>“But I think Germany, especially Germany, and Sweden really invited too many people. They should have been more circumspect at the beginning. My own parents lived in very good security conditions, under my protection, and even they found an excuse to leave!”</p> <p>Most attendees agreed that peace in Syria should be the long-term solution.</p> <p>The knock-on effects of the crisis are far reaching: Tony Smith, the Deputy Director of international border control think-tank Borderpol, made a clear connection between the handling of the issue and Brexit.</p> <p>“They voted to leave because they don’t feel that the EU is in control of its borders,” he said. </p> <p>“And when they see images flashed across their television screens from different parts of the external frontier where people aren’t being properly checked, when they see terrorist attacks being perpetrated in places like Paris and Brussels by people some of whom have actually entered illegally via these routes or travelled outside of the EU and crossed borders without being identified – they are afraid.”</p> <p>Fear was also one of the keywords when ex-Communist central-eastern European Union members refused to take in refugees, as former Hungarian prime minister, Péter Medgyessy apologetically explained.</p> <p>“What is also a key factor is that these countries do not have a middle class, so the traditional attributes of the middle class, such as empathy and helpfulness have no roots in society, because the era did not allow this kind of initiative.”</p> <p>One of the key topics at the conference was the struggle of the European periphery in terms of integration and prosperity. The Western Balkan countries’ ultimate goal is still EU membership, as the Presidents of Montenegro and Albania underlined. </p> <p>This could be explained by projects such as the Silk Road, which would renew the ancient land route to China and would greatly benefit every country in between.</p> <p>Maria Magdalena Grigore is the Secretary of State for Transport in Romania.</p> <p>“The session was very important because it gave us the opportunity to, of course, underline the importance of these multilateral connections between huge consumers and huge producers of the world which, in our terms, it’s on one side Europe and the other side China,” she outlined.</p> <p>Creating such a huge project is not easy. Obtaining finance for new infrastructure and tearing down commercial boundaries between countries, for example, take time, and a lot of networking. </p> <p>The right people brought together can easily hatch new ideas or solve old problems, which is where the founder of the forum, Jean-Paul Carteron sees their mission.</p> <p>“The subjects we are proposing in the programme have only one goal: they serve as a pretext for bringing together big names – the interest being that they get to meet each other,” he said.</p> <p>Crans Montana benefitted from this occasion to honour some of its high-level guests with the Foundation’s prize. As well as people like President of Albania Bujar Nishani and Morocco’s Environment Minister Hakima el Haité, they also recognised the work of rescue dogs, represented by Markus Bock, President of the International Rescue Dog Organisation.</p>