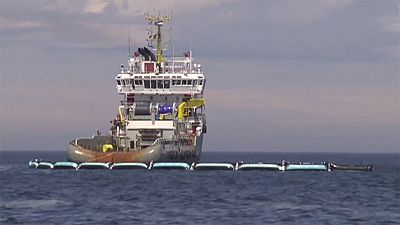 About eight million tons of plastic enters the oceans every year.

And environmentalists have long sounded the alarm bell over this plastic pollution that is killing a huge number of seabirds and marine mammals.

Fresh hope comes from the North Sea, 23 kilometres off the coast, where a dutch company, Ocean Cleanup, is testing a system of floating barriers which could help to collect plastic debris from the sea’s surface.

Boyan Slat, Ocean Cleanup’s founder, says: “The system is made out of these very long floating barriers – as we can see here – which allows us to catch and concentrate plastic, but also out of mooring systems that keep it in one place and a system that takes the plastic out of the ocean
once it’s concentrated.”

The 100 meter-long long V-shaped prototype, which resembles enormous rubber sausages, will be tested in the tough conditions of the North Sea for one year.

The wastes get pushed by the ocean currents towards the V’s apex, where the debris can be collected and then sent to a recycling facility.

“In the past people thought about cleaning up the ocean,” Slat adds, “but those ideas were all based on boats with nets that would go out and fish for plastic, but the thing with that is that it would not only kill the sea life and be very expensive, but it would also take about 79.000 years’ to do so.”

However, the floating barriers can only catch plastic wastes on the sea surface, which is a small part of the millions of tons that may have entered the oceans since the 1970s, experts estimate.

According to Nina van Toulon, Indonesian Platform for Prevention and Management of Waste: “Eighty percent of all that waste in the sea originates from land-based sources so you cannot tackle just marine debris.

Good news for the controversial Ocean Cleanup Array, which will start tests in the North Sea by the end of the week. pic.twitter.com/nUNihc98Di

“So this prototype, of course, tackles one part, but if you really want to tackle marine debris you have to start on land.”

If this technology is successful, it may be deployed by 2020. According to the company’s estimates, in 10 years it could remove almost half of the Great Pacific Garbage Patch, an area in the central North Pacific Ocean where marine debris naturally concentrates because of sea currents.

France bans plastic bags, what about the rest of the EU?