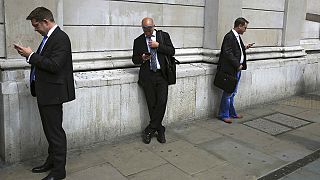 Smartphones and tablets are powerful tools of information and communication and, for most, an essential piece of kit.

But too much usage could make you go blind.

The desire to keep using our phones, even while lying in bed, has been identified as causing temporary vision loss and can adversely affect your sleep.

While this may not be rooted in everyone’s behaviour, it is a common problem to these users in London.

Judit Serra says: “A typical thing [is] when you go to sleep and you cannot just get rid of your phone, so you are just like lying in the bed and you are still like chatting with everyone until you fall asleep”

Adeeb Arif has fears about his sleeping patterns: “I sleep late and I’ve found difficulty getting up in the morning and because of the light I can’t fall asleep on time. I think blue light interferes with your sleeping pattern and that’s why.”

“More than two billion people worldwide use a smartphone. The individual average usage is estimated to be between four to five hours a day.

London smartphone user Marcela Montes says she has concerns about her vision: “For my eyes I will worry because sometimes at night when I use [my smartphone] before I sleep, when I close the cellphone and put it off, I can feel like in my eyes [there are] some black points sometimes.”

The New England Journal of Medicine& has reported the separate cases of two women who experienced “temporary blindness” for months.

Although most people look at screens with both eyes, people frequently use smartphones while lying down, where one eye can be inadvertently covered or out of focus.

According to Dr Gordon Plant, consultant neurologist at the
National Hospital of Neurology: “It will take several minutes before the right eye can see as well as the left eye, the opposite is true of course if they’re lying on their right side.

“So what worries them is that they think the problem is that they can’t see with the eye that’s been exposed to the light and if they’d been viewing the phone with both eyes, both eyes would be the same and they wouldn’t think anything of it.”

After the women have been complaining of bouts of temporary vision loss they underwent various medical investigations, including MRI scans and heart tests. At first no cause could be found.

“Transient monocular visual loss, so the temporary loss of vision in one eye, is a very, very important symptom, because it can be the warning of a stroke,” Dr Park adds.

“And it’s one of the commonest reasons that a patients coming through Moorfields [Eye Hospital] casualty are referred to a stroke unit because they’ve had transient loss of vision in one eye and although, of course it’s much more common in older people, even young people can have strokes and can have a risk of stroke”

Symptoms of temporary smartphone blindness are very similar to a more serious problem such as a stroke. There lies the problem as this can cause a wrong diagnosis from doctors, the neurologist warns.

Dr Plant continues: “A few years ago these patients would be referred first to specialist clinics.

“But now because of the stroke pathways and hyper-acute treatment of stroke they’ll be referred automatically to a stroke unit where they’re seen by stroke physicians who aren’t necessarily au fait (familiar) with ophthalmic disorders, and they’ll just be processed automatically, have MRIs and CTs and ultrasounds and all the rest of it.”

So watching tiny screens may harm your vision, and affect your sleep. The solution – take a break every 20 minutes or read a book in bed.