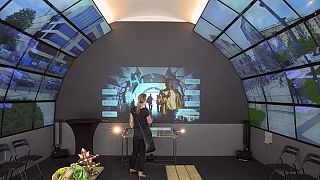 Imagine being transported to another place while remaining exactly where you are. Two European cities, separated by geography, history and culture are being united in cyberspace in the Luneta project
http://www.visitberlin.de/en/event/07-03-2016/berlin-breslau-luneta. Step into a blue dome in Berlin’s Dorothea-Schlegel Platz and you end up in Pilsudskiego 105 in front of the train station in Wroclaw in Poland. The city is the joint European culture capital for 2016 – San Sebastian in Spain also holds the title.

The Luneta project connects the cities in real time using video walls, with less than a second delay. It creates the illusion of stepping from one place into the other.

“Luneta is really a window, it’s a window between two cities, that are divided, says Chris Baldwin, Curator of Interdisciplinary Performance for Wroclaw, European Capital of Culture 2016. “Divided in many different ways. They divided obviously both because both cities are in different countries. They are divided through language, and they are divided through geography, but they are also divided to the imagination and memory, principally because until 1945 Wroclaw was Breslau it was obviously a German city.”

The camera system is crucial for the project. The parts of the structures not accessible to the public contain the project’s backbone. There are monitors mounted on a special scaffolding as well as the servers that make the connection possible.

Jacek Bednarek, Luneta technician in Wroclaw said: “The new things of technicals is we have 60 monitors, which are connected to the 60 computers, and using a network we have the live streaming to the other city. We can connect two cities in real time in Luneta (project).”

The idea of ‘playing’ is an integral part of the project. Visitors are encouraged to dance with viewers on the other side of the screen or paint virtual messages. For most visitors, distance and cultural differences dissolve as they meet neighbours in another country.

The installations are open until
July 3.