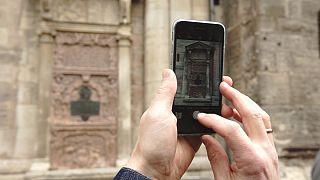 <p>In this edition of Futuris, we look at whether our smartphones can help to create sophisticated 3D models.</p> <p>In a World where smartphones, sensors and cameras are everywhere, researchers dream of using their mobile phones differently. </p> <p>They want to turn them into active makers of 3D computer models. </p> <p>Michael Wimmer is a computer scientist with the <a href="https://harvest4d.org/">Harvest 4D project</a></p> <p>“The reconstruction of 3D-models is very expensive nowadays,” he told Euronews. “One reason is that very costly equipment has to be used. Also, you have to plan exactly where to put those instruments in order to be able to really create all parts of a model. In this project we are trying to make reconstructions much easier, not with expensive instruments, but with ordinary mobile phones for example or digital cameras which everyone has.”</p> <p>After complex mathematical calculations, still photos are rendered into 3D models. </p> <p>Before getting this result, scientists say very different technical challenges had to be overcome.</p> <p>“The original pictures are of a very different scales,” computer scientist Samir Aroudj told Euronews. “Some are taken from far away. Others just offer details. These different distances also lead to different surface-samples of the objects. If I have a photo taken from far away then the samples are rather imprecise, and should be written over by the ones that have been taken from very closely, in order to reconstruct even small details correctly. Another challenge is to realize which pictures show the same surface-parts, even though they might seem they show different details. Lightning can be different, we might have bright Sun on one image, or a cloudy sky, and yet the computer has to be able to relate the images correctly.”</p> <p>Scientists from this European research project have had to teach computers to understand the shape of real objects in evolving environments.</p> <p>They say that it is far from simple. </p> <p>Computer scientist Tamy Boubekeur develops computer models and algorithms to interpret the data coming from 3D captures. </p> <p>“We need to make sure that all the data measured in the real world, that can be 1 million, or one billion digital points, translate into a virtual three dimensional object that applications can later make a good use of,” he told Euronews.</p> <p>“At the end of the day, when you try to bring the real world into a virtual world, you need to make sure you work three different parameters at the same time: you have to digitize the shape, the motion and the appearance of the real world to transform them into virtual interactive applications,” he added.</p> <p>Scientists are also exploring how to easily turn reality into 4D reconstructions; that’s 3D plus evolution in time. </p> <p>They have developed, for instance, systems to recreate 4D graphics out of photos taking by archaeologists during their digs. </p> <p>“So while surfing into this three dimensional graphic, we can interactively see the parts that have changed during archaeological excavation and the parts that were left unchanged by archeologists during their digs,” computer scientist Paolo Cignoni told Euronews. </p> <p>And researchers are now looking ahead at eventual practical applications, with the study and protection of Cultural Heritage a first evident choice, they say. </p> <p>“It is possible to use the 3D models (that we can produce) for exhibitions and museums. The advantage is that it has become easier to produce these models so that for instance even people working at archeological sites can participate directly and create those models on their own,” said Wimmer.</p> <p>Researchers hope their technology could become a market reality in less than five years.</p>

Takeaway: 3D in your pocket