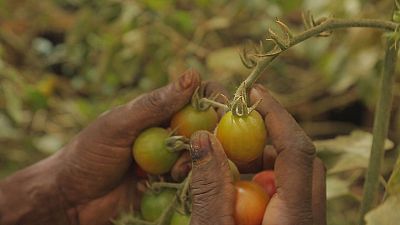 This edition of Focus travels to Senegal to see how the country is gambling big on an agricultural future. Food will be the motor of growth, ensure no-one goes hungry, and boost exports.

When we talk about emerging it is with human resources first and foremost that we do that, men and women working, earning money and reinvesting to improve their lives

“In Senegal there’s a saying, ‘If agriculture is ok, then everything’s ok’. Well, in the last two years we have had record harvests. Agriculture is the country’s primary natural resource, and in Senegal it is constantly modernising,” says euronews’ Serge Rombi.

To get a better picture look along the river Senegal. On its banks two-thirds of the country’s rice is grown. In this zone one company has invested 55 million euros in a high-tech rice factory.

This idea is to ensure that in three years time this plant produces 100 000 tonnes of rice a year. That would make it one of the biggest factories in west Africa.

“We have everything we need here, good soil, abundant water from the Senegal river allowing irrigation, which is very important, and the climate which allows us to make two annual harvests with a yield of six tonnes per hectare, which is a very good benchmark,” says the Operations Manager for the Saint Louis Agricultural Company, Bruno Redon.

Bruno is creating new paddy fields and taking irrigation out to local producers so that they can supply the new factory.

“We’ll offer the farmers production contracts between us, a bank, and them. Today a farmer can make one annual harvest. If we buy that, the bank will offer him credit, so he’ll be able to plant a second annual crop,” says CASL’s Operations Director Francois Grandry.

Here the production will be exclusively reserved for the domestic market. Rice is Senegal’s staple food, and the demand for good-quality product is exploding.

Here in this sandy region in 2003 Senegal’s biggest horticultural producer embarked on what looked like a crazy project; growing cherry tomatoes and corn.
The company sank 25 million euros into the enterprise, building giant greenhouses. Today they produce 14,000 tonnes of vegetables per year.

In stark comparison to the rice factory this is 95% for exportation. The tomatoes go as far away as Russia. As an export-driven company, it gets some tax sweeteners and special status.

“Customs duties are suspended and so are certain taxes. These costs for exporters are scrapped, and it helps make our prices more internationally competitive. We can sell more abroad, and compete in the European market against other producers.It’s as simple as that,” says the Head of Human Resources at Grand Domaines du Senegal Abdou Sambe.

Its products may go abroad but in the process the company has become one of the region’s biggest employers.

Growth is contagious, too

As a ricochet effect the factory’s expansion has also led to more activity in Dakar’s port. Success breeds success, here just like anywhere else.

“You can see how successful agriculture projects feed into the wider economy, like retail, transport, industry with the development of agribusiness, and all this combines to make this a strategic sector that can have real leverage in relaunching the Senegalese economy,” says the Director General of the Economy Ministry’s Economic Planning and Policy, Pierre Ndiaye.

The country has been working very hard for several years in a bid to improve its business climate and make Senegal more attractive.

One focus has been on better management of commercial disputes, and the development of public-private partnerships. Administration costs have been slashed, along with red tape and paperwork.

“Administrative costs have been slashed by two-thirds and you can create and register a company in Senegal in under six hours,” says the CEO of APIX, Mountaga Sy.

For the agricultural sector certain specific measures have been put in place.

“Connecting warehouses to vital utility services like drains, water and sewerage is now done in under 40 days, not 90,” says Sy.

The Senegalese government also wants easy credit terms and access to land for the sector. Senegal is seeking to emerge as a developing nation, with agriculture as one of its pillars.

“When we talk about emerging it is with human resources first and foremost that we do that, men and women working, earning money and reinvesting to improve their lives. All all this makes Senegal an attractive place to set up, to invest in farming and make money, but also to help the local populations improve their living standards,” says Abdou Sambe.

The message seems to have got through. In 2015 foreign direct investments leapt by 17% in Senegal.