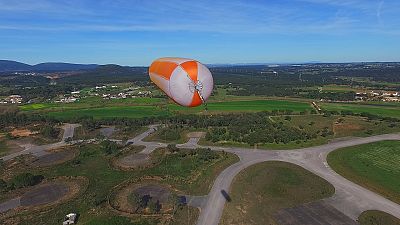 Futuris producer Denis Loctier looks at the development of a flying machine that produces clean energy.

Old flying machines gobble up fuel and pollute the atmosphere. But could we construct an airborne device that would itself produce green energy? At a former military airbase near Lisbon, Portuguese engineers are testing their latest prototype.

This balloon may resemble an airship much more than a wind turbine, but this European research project is meant to produce wind power. Filled with 180 cubic metres of inert gas, this flying cylinder is lighter than air.

Pedro Silva is a mechanical engineer at Omnidea:
“The aim of this aerial platform is to capture winds at high altitudes. It should be able to extract the wind energy, and send it down to the ground station. This structure is filled with helium. When the balloon spins, it generates a huge aerodynamic lift force. As you can see, it’s well pressurised!”

Unlike the usual windmills, this prototype has no tower, so it can be deployed wherever necessary. While wind turbines have to make use of relatively weak wind at ground level, this balloon reaches the much stronger air streams high in the sky.

Pedro Silva continues:
“With this, we can go as high as 2 kilometers above the ground. At that altitude, the wind energy is 8 times stronger, and the air streams more steady. So we can get more energy with this system”.

Electric motors spin the module both to stabilise it in the air and to produce a physical phenomenon known as the Magnus effect, which greatly increases the lift force.

Tiago Pardal, is the Omnidea CEO:
The spinning in the presence of wind generates an aerodynamic lift force, similar to what’s created by aircraft wings. The balloon rises, pulling this cable which rotates the drum coupled to the electric generator. So the electricity is produced right here.”

As a spin-off technology, engineers are developing propellers that could give such balloons drone capabilities, or act as small wind turbines to generate more power.

Renato Salles a systems engineer at Omnidea/FCT: “One can use this vehicle as an airborne platform carrying any sort of payload. An obvious choice would be thermal cameras for fire detection. As it can stay in the air almost indefinitely holding a camera, it could provide constant surveillance in any location.”

After reaching its top altitude, the balloon stops spinning. Because of that, pulling it back to earth consumes much less energy than what was produced.

This prototype generates on average 30 kW. The next goal is to stack multiple balloons together in a single airborne system to produce several times more power.