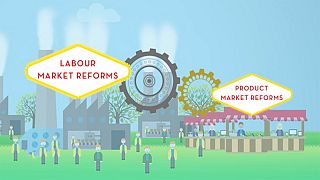 This edition of Real Economy looks at the economic buzz phrase ‘Structural Reforms’ – What does it mean? How does it impact our lives and wallets? When do you reform? And, most importantly, does it work?

To answer those questions euronews speaks to the man in charge of the European Commission’s structural reform agenda, Pierre Moscovici. We will then take a look at the poster child for the recovery and debate, Ireland.

Has the former Celtic Tiger really started to roar again? We analyse the timing of the reforms enacted there. Finally in Germany we ask the question, can you ever stop or do you keep moving with changing times?

Economic orthodoxy explains to us how structural reforms are supposed to lead to stability and growth.

A crash course in avoiding a crash

Structural reforms are meant to make an economy flexible and more resilient to shocks.

For example, increasing competition in the market place gives consumers more choice and so prices fall.

That should lead to higher output from firms who employ more people to produce more. In the long term, wages rise.

But long term employment should rise as firms can be more flexible and can employ more people.

Economic theory says that coordinating both can lead to stronger growth.

As employees, people can work more hours and so potentially sustain the slight drop in wages.

That is because households can consume more because of falling prices.

Firms then increase their mark-up on the goods they sell.

So in the long term, economics tells us with firms selling more and employment and wages rising, the economy should do better overall.

Put it down to the luck of the Irish, but just a few years out of the Troika’s bailout program and Ireland’s GDP is the envy of the Eurozone. The deficit is down, as is the unemployment rate, which is actually below the Eurozone average, and even its sovereign debt looks like it can be fixed.

But as Euronews’ Anne Glémarec found out, there is some debate about what lies behind that luck.

The Keogh family has been growing potatoes north of Dublin for generations. In 2011, as orders were declining, Tom and his brothers had a bright idea: transform their surplus spuds into crisps.

“We started this crisps business in the middle of the recession in Ireland. The business has now just gone 4 years old and we are now employing an extra 27 people here as a direct result of the new crisps start-up. We have further plans to employ a further 12 people in 2016. We currently export about 15 percent of our volume to about 14 countries around the world,” says Tom.

While most private companies cut jobs in the wake of the nascent financial crisis in 2008, the agri-food sector was spared. Even the State cut staff, lowering civil servants’ wages and raising their taxes.

“When the EU troika arrived at the end of 2010 private sector salaries had already been frozen for two years. Public sector unions had already given up the right to strike in return for a government promise to cut no more jobs, and end salary cuts.

In February 2012, Irish unemployment hit a peak of 15.1 percent. That’s when Dublin decided to launch an action plan for jobs.

Its missions were to provide training tailored to companies’ needs, attract foreign investment and boost export-oriented entrepreneurship, such as
Tom’s business.

Enterprise Ireland is one among 60 governmental agencies involved in that strategy.

For University College Dublin economist Aidan Regan, this strategy is consistent with the policies implemented in Ireland for the past 30 years.

Interestingly, when asked whether structural reforms have played a role in the Irish recovery, his answer is unequivocal:

“No. Foreign direct investment underpins the Irish recovery, particularly the exports and the US multinationals. Underpinning this is the role of the state and an active enterprise and industrial policy.

Central to that is, yes, a flexible labour market and a competitive corporate tax regime. The structural reforms which were recommended by the troika in healthcare, the legal profession, were never implemented,” he says.

Today, many Irish people are still wondering why the troika did not restrict its mission to bank restructuring and are looking forward to closing the chapter of austerity.

This seems to be a pretty appropriate time to bring in our guest European Commissioner for Economic and Financial Affairs, France’s Pierre Moscovici.

A lot of questions are being asked about Ireland’s recovery. Can we give any credit whatsoever to structural reforms or is this the result of a country being flexible?

“I would say both. Even during the crisis, Ireland was an open economy – a small size with important specializations and a very flexible labour market.

But at the same time there were reforms there, as well, on the fiscal side because the country was under a programme. And now we cannot say that Ireland is not part of the movement for example in the BAPS initiative but also in the product and labour markets, so all in all I think flexibility and structural reforms move together.”

“How do you convince countries to get on board especially when you see the slowdown that has happened in the reform process?”

“A lot of efforts were made in the past and are still being made, so that now…I would say the aggregate fiscal stance for the Eurozone is neutral and maybe slightly positive with the refugee crisis.

But I think we must also now invent reforms for the future, not only for the past – for innovation, for the quality of public expenditures. This is something in my mind which is very important.”

“How do you correlate that then, with the public perception that structural reforms equal difficult financial decisions and austerity?”

“It is true that for a moment, for a period, fiscal consolidation had a negative impact on growth. It is not the case anymore today. We don’t have to fear reforms. Reforms are not assimilated to inequalities. On the contrary – investment, this is a matter of progress. Innovation, it is a matter of progress. Labour market reforms certainly are about flexibility but also are about security for individuals.”

This brings us to a country that is facing some rather big changes to its population. Germany has an aging population, and enacted some major labour reforms in 2003, with some more last year.

But with a massive influx of refugees and migrants in 2015 they are now facing a rather big challenge of integration.

That brings up some questions that Guillaume Desjardins set out to explore. Just when do you reform and can you ever stop?

Last year, Germany went against the tide in Europe.
While the rest of the continent was tightening its belt, the country implemented a nationwide minimum wage.

For workers like Marta, it was a real life-changer.

“I had these minijobs for three years, and I loved the increasing of the rate, of the minimum amount per hour, it’s awesome!”

The market in Germany has changed a lot over the last 10 years. When the reforms were made in 2003 the purpose was to “bring Germans back to work”. And so they did. Over the period, unemployment was cut in half.

Today, the goal is to improve the conditions of those who were left out : Young workers, women and migrants.

“The Schröder reforms destroyed the labor market 13 years ago, they resulted in every good job being transformed into 3 minijobs or part time jobs. It was really necessary to reinstate order in the labor market,” says economist Dr. Dierk Hirschel.

A minijob is a labor contract that is not subject to social fees. It is cheaper for the employer, but also more flexible, as it doesn’t include any schedule constraint.

With more than half a million vacant jobs in Germany in skilled sectors such as engineering, IT or healthcare, the next challenge will be to train, attract and keep skilled workers in Germany.

In the coming years, Germany will face important demographic changes. The country is getting older and older. And this will considerably change the face of its labor market.

“Germany’s growth has been very much dependent on exports, and we’ve seen positive signs in this regard, in the past quarters, being increasingly driven by higher domestic demand. Which is precisely the type of transition that we would like to see going forward,” says Macroeconomics research assistant at the German Institute for Economic Research, David Pothier.

Those transitions will keep happening as the economy and population face up to future challenges, whether it is aging; migration; or boosting domestic markets. That means Marta and others will need to adapt constantly!

“To return to Commissioner Moscovici, Germany is facing some rather big challenges, what do they need right now?”

“Germany’s external surpluses are huge right now, something like 9% and so to me it creates an imbalance that has to be addressed. The response is clearly investment. And then comes the refugee crisis. From an economic point of view the refugee crisis can be an opportunity and I want to say…”

Maithreyi Seetharaman, euronews:
“And these migrants are pretty skilled as well, quite a few of these refugees..”

“Yes, they probably are skilled but not exactly to our standards. And again, if I look at Germany, there are needs in the labour market – and this needs public policies – learning the language, adapting skills to labour needs . It is probably billions of euros which are needed there. So how to get that?

Moscovici:
The first origin of those funds is national. When Wolfgang Schauble talks about a tax on oil for the refugee crisis – I’m not sure that tax, oil and refugees are very popular but I think his question is honorable –These debates must take place!”

“Ok, so if we are apply that debate to a European- wide outlook– how do you address growth?”

“Downside risks are major, – there is of course, look what happens in China. There is also of course the level of oil prices and so the fact that we are not in deflation but in inflation that’s too low – these are the threats for tomorrow. Refugees are no economic threat.

I would say that our growth in the EU and the Euro area is not so vulnerable to the outside world. If I look at the figures Italy is now out of recession, and Spain is posting above-average growth. There we have other problems of I would say public finances that need to be addressed, because on the one hand you need to reform and on the other hand you need to support growth.”