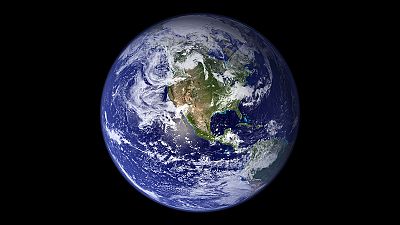 When the first astronauts ventured to the Moon in the 1960s, they couldn’t help but look back and marvel at the beauty of our home planet, the ‘pale blue dot’, Earth.

To see ourselves from space was not only an emotionally powerful experience, it was also a process of discovery, as we began to see and understand processes that couldn’t be viewed from the Earth’s surface.

Seeing Earth from space has also allowed us to observe the changes that we, humans, have wrought on our world through emissions of greenhouse gases like carbon dioxide.

The first of our guests to answer is Jean-Nöel Thépaut, Head of the Copernicus Climate Change Service at the European Centre for Medium Range Weather Forecasts.
“I think you will find it difficult for a scientist to say we are absolutely certain about things. They will say it’s likely, it’s very likely, it’s extremely likely,” he says. “What we are certain about is what is happening now, what we are seeing. So the temperature has increased, the sea level is increasing as well, the sea ice is receding, the glaciers are receding as well.”

Our other specialist, Andrew Shepherd, a Professor of Earth Observation, University of Leeds, continues his predictions for the next century: “Based upon what we know things will look very different in the northern hemisphere. The sea ice has been retreating over the past few decades. We know that for sure. The polar ice sheets of Antarctica and Greenland will look the same from space, they are big white things, but they’ll have a lot less ice in them. And that ice will end up in the water and so sea levels will rise as a consequence of that. So people will need to adapt to those changes.”

Shepherd and Thépaut both use data from what are known as Earth observation satellites in order to draw their conclusions. These highly sophisticated instruments measure everything from soil moisture to ocean colour, wave patterns to ice sheet thickness in a detailed, broad, precise and regular way.

Shepherd illustrates the huge contribution space missions have had in teaching us about our home planet: “In the past 10 years we’ve had really good measurements of the polar regions, thanks to the European Space Agency’s Cryosat mission. We used to think that the polar ice sheets were sitting around as slumbering giants that didn’t change at all, until we looked at them with satellites.”

“Now we see that they speed up from time to time. In fact some places in Greenland are now flowing 5 or 10 times faster than they were 20 years ago,” he says.

Given that the future of planet Earth relies to an extent on the decisions taken at meetings like COP21, is it possible to monitor CO2 emissions from space to check that pledges are being honoured?

“There are already discussions at the European Commission level whether we need an additional Sentinel, or an additional mission, to monitor the carbon emissions and to make sure that what is being promised, or what is being decided during the COP is actually happening,” says Thépaut.

The Sentinel fleet of satellites are the lead instruments in the European Commission’s Copernicus programme of Earth observation. These satellites are workhorses designed to consolidation and continue previous measurements into a steady and reliable flow of data about all aspects of our planet. The latest, Sentinel-3, was just completed at Thales Alenia Space in the south of France, and will be launched into orbit in a few weeks.

Few scientists are prepared to be drawn on the future of Earth a million or more years into the future, but there are projections that do look well ahead, and what they suggest is worrying. Andrew Shepherd gives us one example: “The ice sheet model projections for 1,000, or 10,000 years in the future tell us that there may be no Greenland ice sheet, there may be no polar sea ice in the Arctic. Planet Earth would look completely different if that were the case.”

One of the key outcomes of the COP21 summit should be targets for cutting emissions and staving off the worst of global warming and climate change. But is it madness to even imagine that we can control something as big as a planet? The scientists we spoke to are optimistic.

“Well we’ve made a difference over the last century, by injecting an enormous amount of carbon in the atmosphere,” says Thépaut. “So we ought to be also able to have an impact by reversing this change.”

“Yes, I have faith in technology,” says Shepherd. “Technology has solved lots and lots of amazing things in the 20th Century. There’s no reason why this can’t be solved. Energy needs to come from a different source in the future, I think that’s absolutely clear. All the people with vested interests in this know that, and they are investing resource to try to solve this problem.”