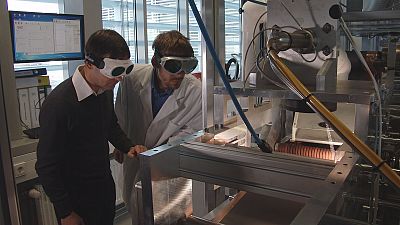 On the streets near a research institute in Dresden, Germany, a Hungarian physicist drives an electric car with a pioneering vision in mind…

András Kovács is managing director at Broadbit: “We want electric cars of the future to run with the help of a battery based on sodium. Compared to current batteries, our sodium battery will double its energy. Alternatively, it can be fast charging; electric vehicles may be fully charged in just five minute.”

And what are the technical challenges behind these car batteries partially made with salt? András had to design and test high power cells, able to increase power, reliability and battery life. He also wanted them to be much cheaper to produce compared with existing Li-ion batteries.

“The electrodes of the battery were developed in two steps. Firstly, we made the anodes from metallic sodium. So this is indeed the first battery based on metallic sodium,” said Kovács.

“Then we prepared the cathodes with a special dry processing technique. Drying up chemically treated cathodes in current batteries needs up to 3 days. With this technology the electrodes are produced in dry state, so production is faster.”

Kovács’ vision has now received important additional recognition. He has recently won the first ever Innovation Radar Prize, aimed at high potential and key creators in Europe. The jury acknowledged his willingness to try to revolutionise the growing sector of electric vehicles.

Stavriana A. Kofteros, from Startup Cyprus, was a jury member on the Innovation Radar Prize: “To start a revolution, to have a disruptive innovation, you need a big vision that nobody, nothing can stop. We can’t just focus on small steps pilling up together to improve minor details on what already exists. A great innovation is able to change the status quo of the market. For this to happen you need an innovator with a lot of energy, a lot of passion and a lot of commitment.”

The Innovation Radar initiative is supported by the European Commission as a way to assist innovators in fulfilling their potential to the market.

“This prize was necessary because excellence has to be rewarded. Dreams deserve to be rewarded and recognised , so we must work together in that direction. It is important that young researchers have challenges in front of them,” said Roberto Viola, Director-General of DG Connect at the European Commission

“You need ideas, because without ideas you can’t go far. But you also need a potential market; without it you can’ t go nowhere. So when it comes to innovation, both things have to go hand in hand. A good idea and a good way to bring this idea to the market,” added Viola.

And, as it is also the case for many other European innovators, that’s precisely the road ahead now for András Kovács.

“Our laboratory research is now finished. We are currently building our pilot manufacturing plant, that should be ready next year. We hope that in 2 or 3 years we’ll be able to launch this product on the market so that our invention can equip any electric vehicle or even planes. The exact time of the launch will depend on the investors who are interested in working with us,” said Kovács.