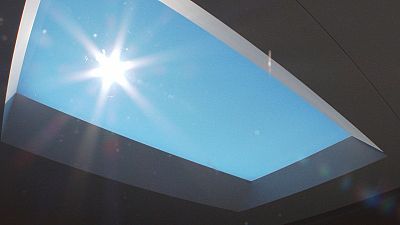 From the Sun, the Moon and flames, to ultra-modern semiconductors, human history is inherently bound to light. In this special edition of Futuris, we meet scientists and engineers who are making our futures brighter.

Sunlight brings us comfort and safety. Wherever we are, we need to see the sky. It is in our nature. Rooms with no windows make us feel bad.

There are no windows in the radio surgery unit at the Humanitas Research Hospital in Milan, Italy – and it is raining outside – yet the room is lit up with a stunningly realistic illusion of sunlight.

“This is an enclosed, protected space, because of the radiation. And that can make the patients feel claustrophobic,” explained Piero Picozzi, neurosurgeon and head of the gamma knife unit at the hospital.

“This window creates an extremely realistic feeling of light – exactly like a real window. And that makes you feel better, calmer, when you enter the room.”

The optical system that hides behind the window is currently rather big, and it costs about the same as an average car.

A result of a European research project, it consumes just 300 watts of energy and has already won several industrial awards.

“How do we make a virtual window? This device is based on an LED projector that has all the spectral characteristics of sunlight and creates a narrow beam with realistic shadows,” said Paolo Di Trapani, Professor of Optics, University of Insubria; Founder and CEO of CoeLux; and the co-ordinator of the CoeLux and the DeepLite EU projects.

“Inside this device are all the optical systems that allow the observer to perceive the image of the sky with the infinitely distant Sun,” he continued.

“Within our project, we’re aiming to develop a sufficiently compact device that can be installed not just at home or in a hospital room, but even in a lift, a car, a ship’s cabin, a train, a plane – anywhere at all!”

Artists know that the Sun creates certain optical effects on surfaces. If we want the light to look natural, these effects need to be understood and reproduced. But how do we get the right colour?

Professor Di Trapani has managed to recreate the exact atmospheric process that makes our sky blue.

“The atmosphere contains air molecules that move, creating fluctuations in density at a extremely small scale of nanometers, a millionth of a millimetre,” explained Trapani.

“We’re reconstructing these fluctuations using nano-particles, a highly concentrated dispersion of tiny spheres with slightly higher index of refraction than that of water.”

The blue part of the spectrum scatters, turning water sky-blue during a demonstration. The reddish yellow passes through. That is the reason why we see our white Sun as yellow when looking through the atmosphere.

The same principle works in the window device, with the nano-particles fixed in transparent plastic instead of water.

“Our technology isn’t artificial lighting, it’s a window,” said Trapani, “a window that recreates the infinite space which man has been used to for hundreds of thousands years.”

The inventors see this as a new philosophy in indoor lighting.

Unlike lamps that create spots of light that remind us of surrounding darkness, these windows create a sunlit world outside – a world that can be turned off with the flick of a switch.

Inorganic LEDs have many advantages. Most notably, they are bright and efficient. But the organic light emitting diodes – OLEDs – have rather unique qualities that open up completely new possibilities.

At the Holst Centre in Eindhoven, in The Netherlands, industrial designers meet material scientists.

They’re exchanging ideas on how to use flexible OLEDs, new piezo-plastics and flexible electronic components in new touch-sensitive and light-producing devices.

“You can actually approach the problem from two sides. The material scientists tend to work bottom-up, from physics, to the mechanics, to how it works,” said Erik Tempelman, Associate Professor in Design Engineering at Delft University of Technology and co-ordinator of the Light Touch Matters project.

“The designers, they tend to think from the outside in, from why does it make sense for a user, why someone would enjoy using it.”

Child healthcare is one of the areas where smart flexible electronics can be particularly useful.

Lights in a table-cloth can interact with plates and dishes adding “magic” to hospital meals.

“We have been focusing on hospitalised kids. And we have been asking doctors, what is the biggest problem with recovering for a child when they’re hospitalised. For instance, we’ve been talking to cancer departments, and one of the biggest issues is lack of appetite – and that it is really important to eat when you want to recover,” explained Hanne-Louise Johannesen, a designer from Diffus Design.

“So the idea was to work with these eating situation and try to bring magic into that.”

Michel Guglielmi, another designer from Diffus Design, added: “What’s applied here is the traditional technique of embroidery, as we’ve known for millennia, in order to carry current from one point to another.”

A toy bracelet, which appears to come alive when touched and cared for, is another example.

It is an attractive way to distract a child from unpleasant medical procedures.

“Light is the primary output that a kid can see – something is happening when they interact with it. So you stroke it, you feel it’s buzzing, but you also see that it lights up,” said László Herczeg, a designer with Fuelfor.

A prototype glove has also been developed, which helps recovering patients to train an injured hand. Its flexible lights visually assist with the exercise.

“This largest light piece gives feedback on the correct or wrong execution of the exercise, and the pieces on the fingers light up when they’re bent,” explained Dario Presti, an electronics engineer with Grado Zero Espace.

The problem is, large OLEDs produced in vacuum evaporators are difficult to make and very expensive.

But European researchers are developing a new technology to print OLEDs in rolls, potentially making light sources as large and as flexible as wallpaper.

“Instead of making it with a complicated process, we try to make it with a kind of printing, so we are trying to make OLEDs like printing a newspaper,” said Pim Groen, a materials scientist at the Holst Centre and professor in smart materials at the Delft University of Technology.

“When I touch here, I smudge it. So we use this machine here, which heats the silver with light pulses for a short time at high temperature. And now if I touch it, it’s dry,” said Robert Abbel, at materials researcher at the Holst Centre, as he demonstrated the technology.

The product can become the base layer for a large-surface OLED. It would need several more layers of various chemicals to produce light. The research is continuing.

New light technologies give us better comfort and create fantastic possibilities for consumer electronics of tomorrow.

But the perspectives are much wider – even in the most traditional fields. For instance, how safe are our agricultural products? A new instrument is shedding some light on that problem.

The Veneto region in Italy is famous for its wine and cheese.

One local company has been producing mozzarella and other dairy products since the 19th century.

The cheese is packed with a specific mixture of atmospheric gases that protects the food from spoiling.

“There are certain parameters that we must respect, and one of them is the oxygen level that should be less than five percent,” explained Lorenzo Brugnera, President of Latteria di Soligo.

“Today we’re checking for that manually, checking some of the packages in the lab.”

A random sample is pierced with a needle. The probe shows the oxygen level, but then the product has to be repacked.

Is there a better way? Yes, and there is already a working prototype.

“The bag arriving on a transporter belt enters the measuring device and has to go through a laser that measures the oxygen level in the package,” explained Paolo Tondello, an electrical engineer and CEO if ‘L Pro,’ as he explained new laser technology.

“The light passes through the bag, interfering with the oxygen molecules inside, and that gives us an indication of the oxygen level in a completely non-destructive, contactless, purely optical way.”

This process works with any non-metallic container. The low-power laser does not damage the packaging and keeps the food intact.

This allows inspection of all the products, not just a random sample.

“To differentiate one gas from another, we illuminate it with laser light at a wavelength that is only absorbed by a certain gas,” commented Luca Poletto, researcher in optics at the Institute of Photonics and Nanotechnologies, CNR; and Safetypack project co-ordinator.

“By measuring how much the light is absorbed, we find the concentration and the pressure of this specific type of gas inside the container.”

The laser probes are now being tested at two food factories. Researchers say that major food manufacturers have shown interest in the technology.

“I’m sure the industry will appreciate this technology, that allows the control of 100 percent of products, providing much greater food security,” said Tondello.

From the comfort of a man-made Sun, to improved health and safety – bright ideas of European researchers are giving us a glimpse of our future, in a new light.

Do you know: why is the sky blue?