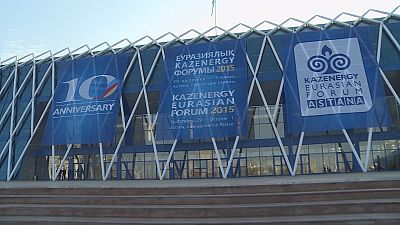 <p>Over the past year the global energy sector has been profoundly shaken. Oil prices have more than halved to below $50 per barrel, under pressure from oversupply as well as China’s weakening economy. This gloomy context overshadows the 10th <a href="http://www.kazenergyforum.com/en">Kazenergy Eurasian Forum</a> in Kazakhstan.</p> <p>Euronews correspondent Natalia Marshalkovitch reported from Astana: <br /> “When the Kazakh capital staged the first energy forum ten years ago, it was a rising market. Now things have changed: prices are low, as well as demand. How could energy producers survive in those conditions? Let’s ask those taking part in the forum.” </p> <p>Speaking in Astana, Pulitzer Prize-winning author Daniel Yergin, one of the world’s leading authorities on energy, predicted that oil prices would remain low in 2016 and it would take at least four years for the per-barrel rate to reach viable levels for producers. </p> <p>Big corporations as well as oil rich-countries are preparing their budgets according to different possible scenarios: optimistic, realistic and pessimistic. Their immediate response is to cut costs.</p> <p>“We are expecting a very significant decline in capital expenditures, on the order of 30 percent, something like that. A lot of projects are going to be delayed, because the companies just simply don’t have money any more. So they’re going to be a lot more choosy and careful about how they spend their available money,” said Matthew Sagers, Managing Director of business research firm <span class="caps">IHS</span> Energy.</p> <p>Kazakhstan is an example, where oil accounts for 20-30 percent of <span class="caps">GDP</span>, 50 percent of revenues and 60 percent of exports.</p> <p>President Nazarbaev has said the country will have to adapt to the new economic reality.</p> <p>According to Timur Kulibaev, a top oil executive and also Chairman of the Kazenergy Association, the price should rebound to a comfortable level in the medium term.</p> <p>“We may see a period where the price plunges, but the exploitation cycles of oil fields last for decades. I think that in such hard times you just have to muddle through. And if we see the oil price drop as far as 30 dollars (per barrel), then what will happen is the global supply will be reduced by producers – and undoubtedly the price will then start to climb,” Kulibaev said.</p> <p>But what if this rebound is curtailed by radical shifts in the energy market? According to the <a href="http://www.bp.com/en/global/corporate/about-bp/energy-economics/energy-outlook.html">BP Annual Global Energy Outlook 2035</a>, global demand for energy is expected to rise over the next 20 years – but at an annual rate of 1.4 percent, lower than expected.</p> <p>Gerald Davis, executive chair with World Energy Scenarios (part of the World Energy Council) sees much evidence of fundamental shifts in the energy industry. </p> <p>“It is likely to be an environment where demand is perhaps slower than we envisage. As we look at the impacts of new regulations, encouraging solar and wind (energy) which will affect particularly the electricity industry, as we look at the difficulties perhaps economically in parts of the world,” he said. </p> <p>“China is perhaps moving on a new path which will decrease growth a little. China is vast, China will still need large amounts of energy, but the oil market tends to always work on comparing reality with what it expected the world to be.” </p> <p>The global oil and gas sector is battening down the hatches: it needs to be prepared for stormy weather ahead. </p> <p>Many analysts say the glory days when oil fetched $100 a barrel are probably gone forever.</p>