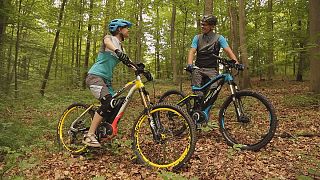 <p>This week in Business Planet, we’re in Schweinfurt in Germany, the European home of the electric bike. How to make the most of the e-bike boom? What are the innovations and impact on employment? </p> <p>Our euronews correspondent Serge Rombi met up with Moreno Fioravanti, who’s from the Confederation of the <a href="http://www.conebi.eu/">European Bicycle Industry</a>, and Managing Director of <a href="http://www.winora-group.de/en/">Winora Group</a> Susanne Puello, to answer these questions. </p> <p>“This year we will manufacture over 1 million e-bikes in Europe, we have over 70,000 employees in 600 <span class="caps">SME</span>s, explained Moreno Fioravanti. “Innovation is the key to business success. I would also suggest finding business partners and teaming up with other <span class="caps">SME</span>s of the same industry.”</p> <p>The electric bike market could triple in the next five years. Becoming safer and safer, but also by far the least polluting method of urban transport, the electric-assisted bike should continue to bring good fortune to European entrepreneurs such as Susanne Puello. </p> <p>“In 2010 we employed 180 people and manufactured 120,000 bikes per year, said the Managing Director of Winora Group. “Today we employ 320 people and manufacture 250,000 bikes per year. We have created a lot of jobs here in Germany.” </p> <p>Innovation is the spearhead of this company which designed the SpeedPedelec in 2010. <br /> This mountain bike is famous throughout the world and was given the title of e-bike of the year in 2014. Susanne and her team believe that the finishing touches are very important. They are in fact essential as these vehicles are electrically assisted up to 45 km/hour and require a driving licence. All e-bikes reaching speeds of more than 25km per hour and with an engine greater than 250 Watts will have to meet the new European standards by the end of the year.</p>