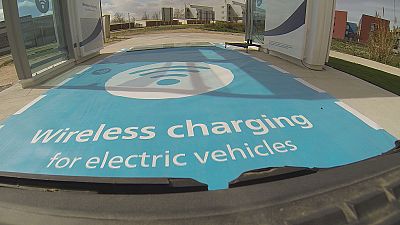 <p>Electric vehicles are undoubtedly a form of transport with a future, but many technical challenges have to be overcome before they replace petrol and diesel-fuelled cars. </p> <p>Researchers in Zaragoza in northern Spain are working on resolving one of the biggest problems; how to efficiently recharge batteries. </p> <p>The scientists involved in the EU-supported <a href="http://unplugged-project.eu/wordpress/">Unplugged project</a> have developed an innovative wireless charging station for electric vehicles. Unlike other systems it can charge electric cars or vans in around 20 minutes. </p> <p>Lourdes García, an industrial engineer with Endesa, said the position of the coils is key: “The system works with coils that are buried under the tarmac of the charging station. It’s use inductive technology. The coil is energized from the electric grid. When the vehicle is positioned correctly on the charging station, a connection is made between the coils and the car. The coils transfer energy to the car. It’s a very flexible, modular system. You can charge cars, vans or electric buses”. </p> <p>Researchers say the method is easier, safer, more vandalism-proof and has less visual impact than charging with cables. </p> <p>José Francisco Sanz Osorio, an industrial engineer with the <a href="http://www.fcirce.es">Research Centre for Energy Resources and Consumption</a> said they are now turning to industry to help complete the testing: “As far as electronics are concerned, we’ve developed 99 percent of its full potential and we have what is needed to produce an efficient wireless charging station. </p> <p>“The remaining work concerns coils; that is where we are lagging behind. We need to find coil manufacturers interested in this product. But these coils are so innovative, that it is still hard to find those manufacturers,” he said. </p> <p>The project also aims to convince the public of the benefits of electric vehicles. </p> <p>But firstly, there were major technical challenges to overcome, as Axel Barkow, an electronics engineer and project coordinator explained: “First on the level of communication, that is, how to make operable the communication between the car and the infrastructure. “Then on the level of energy transmission. That is: How can a 3,7 KW car be charged at a 50 KW charging station. And finally we were addressing the problem of positioning, because positioning the car correctly – that means positioning the coils under the station in line with those on the car. That has a big impact on charging efficiency.” </p> <p>So how can drivers get the full potential of this technology?</p> <p>The answer lies in developing a system that assists drivers to position their cars exactly over the charging coils, so no energy is wasted. Barkow’s colleague Jörg Küfen said their solution involves magnetic fields, optics systems and algorithms: “At the end of the project we’re now at a point where we can say, that with a camera and a radio frequency identification (<span class="caps">RFID</span>) support system we can enable a driver to approach the inductive charging system in the correct way.”</p> <p>More research is needed to increase the charging station’s potential and to optimise its operability, according to José Francisco Sanz Osorio: “We’re working at a given frequency, but in other countries they can be working with a different frequency. So we need to harmonize those frequencies. We also need to agree on the size of the coils, on the distances of electric emissions. All this is needed for the system to be fully interoperable”. </p> <p>“I think as far as cars are concerned we are very close to a serial production, said Barkow. “That is, I think, we will see cars that are equipped with this technology within the next one or two years”. </p> <p>The next big issue, researchers say, is how to develop a dynamic charging system, that will allow vehicles to be charged on the move on motorways and streets.</p>

Do you know: what is an unplugged vehicule?