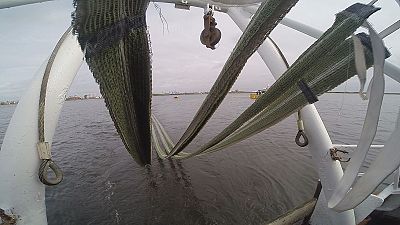 Marine oil spills can be extremely difficult to deal with, requiring a lot of time and effort by experts to remove the pollutant from the surface of the water.

Using this system, we can operate in very heavy seas, such as force seven conditions, where the wave heights would be quite high, and the polypropylene net would follow these wave contours to be able to collect oil from the slicks

In the sea of Cardiff, Wales engineers from a European research project are testing a new prototype that cleans oil spills quickly, efficiently and more cheaply than existing methods, which require multiple vessels and complex oil containment measures.

“What we’ve developed is a net which can float on the surface of the water, without using any containment booms,” explained James Ilsley, an environmental engineer;and managing director of OPEC Ltd, which is developing they system. .

The simplicity of the technology is an important aspect, according to Federico Meneghello, FORCE7 project coordinator: “A big advantage is that this system can operate with a single boat, and can work in stormy seas, because it doesn’t need to coordinate with other ships.”

The point is reinforced by Ilsley:
“Using this system, we can operate in very heavy seas, such as force seven conditions, where the wave heights would be quite high, and the polypropylene net would follow these wave contours to be able to collect oil from the slicks,” he said.

The ‘mop’ soaks up engine oil from the surface without collecting an excess of water. Its synthetic fabric is made of hydrophobic fibres and has a multi-layer structure, which is good for different types of oil products.

State-of-the-art textiles are a key element. “You never know what kind of oil spills will happen – you never know if it’ll be heavy oil or light oil, so you have something like a compromise between two of these things, so you can collect heavy oil and you can collect light oil, and also you have a very strong structure,” said Monika Rymarczyk, a researcher in functional thermoplastic textiles, working on the project.

There are existing mops and absorbent mats but they are less efficient at soaking up oil and tend to sink, according to Federico Meneghello: “This material which is being used nowadays; when it’s submerged, its surface gets soaked with water, so it sinks. Whereas the material developed within the project repels water and holds oil while staying afloat.”

The next step for the engineers is to turn the research prototype into a commercial product that will have a much larger surface.

The mops are capable of absorbing up to 50 times their weight in oil, which can be removed on board the ship with a special machine. Then the mops can be immediately reused, said Ilsley: “The mops are recovered, carrying all the oil that is squeezed off through the yellow rolls that you see there, drops into the bottom, is then pumped onboard to storage tanks. Water can be separated and pumped back to sea if it’s clean enough, or taken away for further processing.”

Engineers expect the design to be finalised in the coming months, and the new product should hit the market in less than a year.

Do you know: what's worse than oil spills?