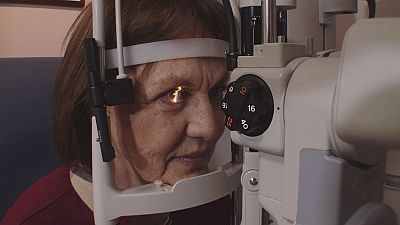 <p>As we age our eyes lose their ability to focus quickly on near and far objects. Presbyopia is a common problem that comes with aging, but its causes are not yet fully understood. There is <br /> evidence that the crystalline lens inside the eye loses its elasticity and therefore its distance-focusing capabilities. </p> <p>María Jesús Blanco Montes’ case is typical. “After the age of 40 or so my near vision started to become poorer,” she says. “I would rather not have to wear reading glasses, so that’s why I came to the hospital looking for a solution to that problem.”</p> <p>Eye surgeons can replace the stiffened crystalline lens with an artificial implant, such as a multifocal lens that allows the recipient to see near and far objects clearly. That’s often done in cataract surgery, but multifocal lenses are not perfect.</p> <p>Ignacio Jiménez-Alfaro Morote, who heads the ophthalmology department at the Fundación Jiménez Díaz Hospital in Barcelona says current treatments are limited: “It would be ideal to find a more physiological solution for presbyopia which would mimic the behaviour of the human crystalline lens. The lens we’re implanting offers correction of near, far and middle sight, but it doesn’t simulate the mechanism to be more accommodative.”</p> <p>But that may soon change. Scientists working on a European research project are combining laser technology with advances in lens-making. They have created organic implants that are capable of changing their shape naturally . </p> <p>Susana Marcos, a researcher in visual optics and biophotonics involved in the <a href="http://www.vision.csic.es"><span class="caps">CSIC</span> Presbyopia project</a> says the ‘accommodative lens’ is an important breakthrough because “it reproduces functions of a young crystalline lens in the human eye.”</p> <p>The laser instruments allow surgeons to study the inner structure of the eye, helping them select the most suitable lens among the existing options.</p> <p>“We can even think of making a personalised intraocular lens, designed specifically for each patient and based on the data collected with these instruments,” Marcos adds.</p> <p>Based on a digital model of the eye, clinicians will be able to make a flexible implant: its shape allowing it to be attached to the eye muscles, just like the old crystalline lens it replaces.</p> <p>Andrés de la Hoz Durán, a biomechanics specialist with <span class="caps">CSIC</span> explains: “That connection enables the muscle forces to be transfered to the flexible lens. That allows it to shape the surface, and when we change the surface we change the focal point.”</p> <p>The researchers say their laser instruments can be made compact and easy to use in clinics, giving ophthalmologists an efficient tool to treat presbyopic patients.</p> <p>“We hope this system will help the patient to experience in advance how they will see after the surgery. says Carlos Dorronsoro, a researcher in physical optics at <span class="caps">CSIC</span>. “They will see how an intraocular implant will change their vision, and thanks to that the selection of the lens will be optimised.”</p>

Do you know: what's better, the eye or the camera?