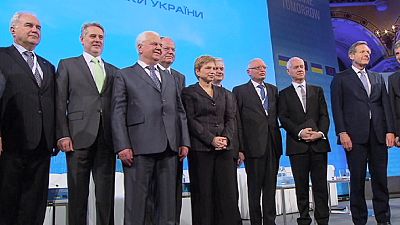 A new group comprising international statesmen, trade unionists and employers has been formed to help Ukraine kick-start its economy which is on the verge of collapse.

With soaring inflation, tumbling GDP and a currency whose value is plummeting, their task is to come up with a billion-dollar reconstruction plan aimed at attracting foreign investment.

Ukraine is in a “Catch 22” situation. The crisis means business desperately needs investment, but it also means that foreign investors are reluctant to put their cash in.

“The most important asset of Ukraine is the people. And the human resources are absolutely fantastic and the talent and the education background are quite famous,” explained Laurence Parisot, former President of the Mouvement des Enterprises de France (MEDEF)

Put together in Vienna by the controversial Ukrainian businessman Dmytro Firtash, the Agency for the Modernisation of Ukraine is made up of former figures from the world of European politics and includes prominent thinkers.

“In order to build a prosperous economy you have to have sane background and ground and roots regarding politics and ethics,” said Bernard-Henri Levy, French philosopher and writer.

The new reform group does not intend to contradict the Ukrainian governments’ efforts, as the key problems to solve are mainly the same: lack of tax transparency, the “black economy” and corruption. Something Poland, for example, has already experienced.

“Beside the necessary regulations, legislations, institutions, etc I think that it is so important to convince the ordinary Ukrainians that you really don’t have to pay. This is a very simple message, but most of the people don’t believe it, that it’s possible. When the majority share the same approach, it will be a very strong punch against corruption,” opined Wlodzimierz Cimoszewicz former prime minister of Poland.

The group says the presidents of Ukraine and France back the plan. Once it is ready they will start raising funds. The UK’s Prime Ministerial Trade Envoy, Lord Richard Risby says stressed he has discussed it with David Cameron’s office

“I’ve been closely in touch with David Cameron’s office, I’ve been talking to our foreign secretary about this. Of course they are so anxious for this matter to be resolved and therefore they support our process. And I want to add: so do our American friends whom I’ve been in contact with as well. Ukraine has friends,” he explained.

This Agency wants to raise up to 300 billion dollars in the investment fund. Germany’s Peer Steinbruck will head the group’s finance and tax efforts.

“We have to mobilize the capital. This will be a great challenge. Up to now on the other side the International Monetary Fund and the European Union have already made a commitment to support Ukraine. But in terms of the “Marshall Plan”, as some people could be quoted, (FYI: the authors of this initiative and the Agency call it “Marshall Plan”) I think we’re talking about more money. Not in one year, but in some years,” he concluded.