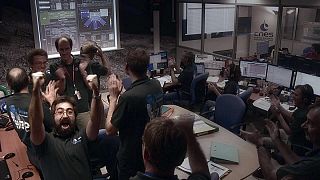 Over the past year Space has brought you the key developments of ESA’s incredibly ambitious and enormously challenging Rosetta mission
to catch a comet. In this edition we look back at the best moments from our Comet Hunters series, which had exclusive behind-the-scenes insights throughout the entire Rosetta adventure.

We followed the team of scientists through all their ups and downs, beginning in January, when Rosetta was still asleep after a 10 year journey through space. Here’s how events unfolded:

288 days before Philae is set to land and Rosetta should be waking up, but the signal is late…and when it arrives the relief is huge.

“Getting it back is incredible, now we have one of the most fantastic adventures in front of us, one of the most challenging space missions ever,” says Andrea Accomazzo, ESA’s Spacecraft Operations Manager.

His sentiments are echoed by Matt Taylor, Rosetta Project Scientist: “I didn’t think I was going to get this stressed, I got very stressed. Now we’ve got it back, and we can do the science we’re supposed to be doing for the next few years, this is a brilliant, brilliant time.”

A few weeks later and Operations Engineer Armelle Hubault is all smiles. She and her colleagues control the Rosetta spacecraft, and the mood post-wake-up is upbeat.

‘‘Today, I’m feeling optimistic and I’m telling myself that everything will go well. We’ve done all the tests, there won’t be any surprises and it’s going to be fantastic,’‘ she says.

In response to our question about message she would give to Rosetta, Hubault says: “Dear Rosetta, I hope everything’s going well up there, not too cold, that you don’t want to get back under the bed covers, because this time, you know, we’ve got to go for it.”

We jump to 204 days to go before Philae is released, and Matt Taylor and Fred Jansen at ESA’s centre in the Netherlands are talking science and tattoos.

“What is really exciting here of course is the target, we don’t know it even, so everything that we prepare now, one single whim of the comet and it could be thrown out of the window, “ adds
Jansen, Rosetta Mission Manager.

“I had a tattoo done of a previous mission I was working on so of course I had to have one done of Rosetta,” says the much-tatooed Taylor hoisting up his shorts to reveal the latest addition to his gallery.

With a burst of pride he tells the spacecraft: “Hi Rosetta, you’ve done well, you’ve come out of hibernation. No more sleeping. It’s on like Donkey Kong – let’s do some science.”

By the summer the Comet Hunters were closing on their prey, but it turned out to be not exactly what they were expecting.

The comet they have caught is quite a strange character.

For the operations team it’s a huge challenge right now to learn to fly around a comet in real time.

“Now that we have arrived at the comet we have to start characterising this object,”
says Andrea Accomazzo, Rosetta Flight Director.

“It has already a very strange shape. We want to map this object from several angles. So what we are going to fly in the very beginning is very strange orbits, almost a triangular shape, , which allows us to view the object from different angles,” he says.

It looks like it has a ‘head’ and a ‘body’, to the amusement of Armelle Hubault: “It’s a strange comet. We’d thought of lots of different possibilities for the shape. But I don’t think anyone was expected a rubber duck!”

Now that Rosetta is circling the comet all attention is on Philae.
In 50 days it will land, and at ESA’s astronomy centre near Madrid Laurence O’Rourke and Michael Kueppers are managing which instruments do what, and when.

“The tricky bits are the unknowns of course. Every day it is an object which is coming alive every day, it’s producing more gas, more dust,” says O’Rourke, Rosetta Science Operations Coordinator.

“The landing site has now been selected, and of course we hope that it will be successful. And it is clear that it is a risky business, but I think it will be a success,” adds Kueppers, who shares the same role as O’Rourke.

“The landing itself is a huge event,” says O’Rourke. “We will separate the lander at a certain distance. It says bye-bye to the mothercraft which has brought it so far, and within about an hour or so it starts uplinking the images, so of course getting the signal from the lander will be very important.”

In his personal message O’Rourke says: “Hey Rosetta, you may be hundreds of millions of kilometres from here, but don’t worry, you’re not going to crash into the comet, because we know exactly where you’re going to go. Keep working, keep alive, and keep sending those beautiful data, those beautiful images to us.”

“Rosetta, it was a long journey, but now you’re there. I trust in you, we will have a great journey until the end of the mission,” adds Kueppers.

In October, less then a month before landing and the Comet Hunters are flying right down to under 10 kilometres above the surface.

The tension is mounting.

“Now we are in the close observation phase, and slowly and gradually we have started orbiting the comet at lower altitudes,” says Accomazzo.

“Of course it can happen that at any time the comet becomes very active, and pushes the spacecraft completely away from its trajectory, but this we cannot predict.

“The softer the surface is the more likely it is for the lander to have a soft landing, and have higher chances not to flip over.”

The Flight Director bids an affectionate farewell: “Ciao Rosetta. In a few weeks the top time of your life is coming up. When the baby goes, don’t shake too much. Be reassured that it will gently touch down here on the comet. Let it go, it’s the time now to let it go. Ciao, all the best.”

Of course the story was to have a few more twists and turns yet, and a few bumpy landings.

November 12, 2014 is a day the Comet Hunters will never forget. The world watched as Philae touched down on a comet.

In the end Philae surprised everyone by bouncing twice before landing in a dark crevice where it couldn’t recharge its batteries.

It gathered science data for 64 hours before its energy ran out
.

Some of the instruments didn’t work, but the Comet Hunters caught their prey, and made history in the process.

“Nothing else comes close to this,” said an excited Matt Taylor. “The exploration, the science and just the ‘wow’ factor. My son told me he wants to be a scientist and that’s only in the last year since I have been working on Rosetta, so, job done.”

“The emotion is so enthusiastic, like little kids at Christmas. I think everybody here gets the real feeling of what we are living, and this is a real historical moment,” said Paolo Ferri, Rosetta Mission Director.

Producer of Euronews’ Space series Jeremy Wilks shared in the scientists’ joy, having followed the mission every step of they way: “That’s not the last we’ll hear from the team of course, in 2015 we’ll have an update on the science from Rosetta and Philae – which should be fascinating,” he says.