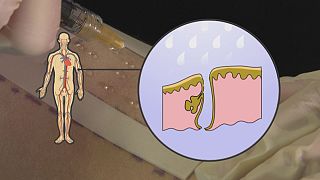 The AIDS pandemic has claimed the lives of nearly 40 million people. Another 35 million are living with HIV. Scientists around the world however are getting closer to creating a vaccine that could prevent or eliminate the infection. In this program, we go to the forefront of the war against AIDS.

The search for an HIV vaccine begins at a very unlikely place. An amateur drag queen festival in Barcelona provides local anti-AIDS activists with an opportunity to get in touch with a community at risk.

In the Spanish city, men who have sex with other men account for 81% of new HIV infections. Public campaigns bring people at risk to centers like BCN Checkpoint where they can get tested for HIV quickly and anonymously. Hundreds of regular visitors agreed to share their blood samples with researchers. For immunologists, this is an invaluable resource.

Ferran Pujol, director of BCN Checkpoint explains how he became involved: “I was diagnosed with HIV in 1986 when no therapy was available. That was a shock. But it also motivated me to get actively involved with the search for a solution.”

“Researchers have no problem finding people with pathologies in hospitals. But when they need to study people who aren’t sick, they can’t just go looking for them on streets. So centres like ours, visited by thousands of men – gay men, in this case – provide excellent research material,” said Pujol.

A group of scientists led by Christian Brander has shown that the immune system of men who have many male partners responds by developing some resistance to HIV.

Christian Brander is a researcher in immunology (ICREA-Institute for AIDS Research IrsiCaixa), a CUT’HIVAC project co-investigator:
“If we can identify individuals who appear protected against an infection with HIV, then we can use that data to build a vaccine that should protect everybody. We have been looking at some cases of people who seem to have mounted a quite specific immune response against the virus. That needs to be further studied, but it would definitely be helpful to build that information into vaccines.”

Scientists use extreme safety measures working in the lab with HIV material.

“We take specialised defender cells from the blood samples and stimulate them with pieces and parts of the virus. Then we see which cells react to it and which don’t. That is very important, because we want to understand whether these healthy people from BCN Checkpoint have more such cells that prevent them from getting infected when exposed to HIV. We can also compare that with samples of people who did get infected, and ask ourselves, how are they different?” added Brander.

Vaccines based on that knowledge could help to fight an existing infection, but the primary goal here is to help the immune system prevent the virus from infecting the person in the first place.

According to Brander: “the vaccine that we’re currently pursuing is a vaccine that is preventive, and what we test is its immunogenicity – how much immune response it will make in somebody we’re giving it to, in people without infection.”

Lab-produced vaccine candidates may work – or not. Before trying them on humans, scientists must make sure that these compounds are safe to use and that they do have some positive effect on the immune system.

“We measure the response by immunising the mice according to the study protocol, and then we recover white blood cells from their spleen and measure the standard immunological parameters,” said Àlex Olvera, a pre-clinical researcher at the Institute for AIDS Research IrsiCaixa.

Researchers coordinate their efforts with colleagues across several countries, from Peru and Mozambique to Germany, UK and France.

Our correspondent Denis Loctier next visisted Paris where scientists use samples of human skin to learn how to vaccinate people against HIV without using a needle.

This skin left over from plastic surgeries allows the researchers at the Pierre and Marie Curie University to refine their innovative method of simple, painless and needle-free vaccination.

“The skin is a material that’s very rich in antigen cells, which are the cells of the epidermis or dermis. The vaccine could be targeted towards these cells and carried to the lymphoid organs to be present in the immune system,” said Béhazine Combadiere, an immunology researcher.

Needle-free vaccination works by removing small hairs with sticky tape. That opens the way for vaccine particles to enter the skin.

The outer layer of our protection against the environment has evolved mechanisms that can strengthen the efficiency of vaccines. By studying skin samples under the microscope, the scientists find out whether their method works as suggested.

“Through a microscope we can look at these cuts and see the amount and location of the vaccine particles which have penetrated human skin,” immunology researcher Jessica Gonnet told euronews.

The analysis shows that the nanoscopic particles of the vaccine have reached the target cells successfully.

“The vaccine is taken on by the cells surrounding hair follicules and transported to the ganglion and shows up in the immune system. The idea now is to trigger the right response in a patients’ immune system,” said Combadiere.

Clinical study participant, Nick Robertson, explains how he got involved in the London based campaign: “I’m HIV-negative which is why I was able to participate in this study, but I have friends who are HIV-positive. I’ve long supported HIV charities, but this presented an opportunity for me to do more.”

Nick is one of 30 volunteers who received needle-free vaccinations over a six-month trial period at Saint Mary’s Hospital in London.

Goli Haidari is a researcher involved in the tests at the Clinical Trials Centre: “The kind of people that we have enrolled are the people who are generally healthy, their body mass index is less than 30, their age between 18 and 45, they do not have any significant medical problems, and they are not on any medications that might be affecting their immune system – for example steroids.”

Researchers follow a study protocol that includes measuring various health parameters and taking photos that document the skin condition before the vaccination.

“What’s really great about the method is that it’s needle-free, so it’s a very attractive route. We know that conventionally giving a vaccine has always been deep into the muscle which can be quite sore and painful for up to couple of days, so great thing it’s needle-free. It’s very new, it’s a great technique that’s been developed, and so far all the participants have been absolutely fine with delivering of this vaccine,” added Haidari.

After treatment, euronews spoke to Robertson about the experience:
“It really did not hurt at all! The only thing was that you had to be there with your arm up on the side for 20 minutes, while the vaccine itself dries before they put a dressing on. It was really easy, I was quite relieved because I’m not a big fan of needles! But it was cool, it was fine.”

“It takes a little bit longer, because we have to prepare the skin, and then to let the vaccine dry; and the other downsides are that the participants can’t wash, or sweat, or anything for 24 hours, so that’s a potential disadvantage when we’re trying to expand that technique to participants,” said Haidari.

Researchers make blood analyses to find out whether the vaccination had the immunological effect they’re looking for – namely, an increase of antibodies and white blood cells that work together to defend the body against infections.

Robert Shattock is professor of mucosal infection and immunity at London’s Imperial College: “Having processed the blood, the red blood cells fall to the bottom of the test tube, and we’re left with the thin line of white blood cells. And it’s the white blood cells that we hope have responded to the vaccine.”

Put together, new vaccines and the new needle-free delivery can bring about simple and convenient means for HIV prevention.

“Obviously, we’re at the moment at the prototype stage, so what you see right now, if it was successful we will then refine, so it might well be like a small micro-needle patch, that could be applied to the skin, without necessarily requiring a clinician to apply it,” said Shattock.

New prevention means can bring improvement across the world, from vibrant urban centres like Barcelona to rural communities in Africa, helping to win the war against AIDS.

Do you know: where's the cure for HIV?