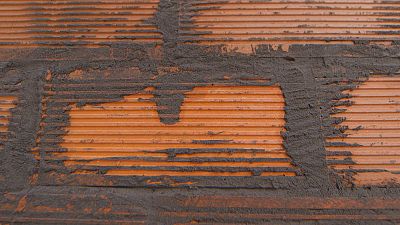 <p>Houses of the future could be partially built with bacteria. It sounds like science fiction but researchers involved in an <a href="http://eco-cement.eu/" rel="external"> EU-backed project in Madrid</a> are working towards making this a concrete reality. </p> <p>It starts with a common type of soil bacterium being revitalised in a mixture of urea and nutrients at a constant temperature, of around 30 degrees Celsius.</p> <p>Piero Tiano, a biologist with the Italian Institute for the Conservation and Preservation of Cultural Heritage told euronews how it works: “Inside this mix, bacteria starts to develop; they basically grow in number. The bacteria has to reach a certain quantity in order to make cement. After around three hours of fermentation, our mix is ready for use”. </p> <p>The scientists then add the revitalised bacteria to a mix of sand, industrial cement waste and the ash of rice husks. </p> <p>Cement manufacturing accounts for some five percent of global carbon emissions, researchers say. This project aims to prove that a greener, ecologically friendly cement is possible. </p> <p>“Our raw materials are basically all waste. So we don’t have added costs,” said Laura Sánchez Alonso, a mining Engineer and Eco-Cement project coordinator.</p> <p>“For instance, we don’t need to extract and transport the limestone commonly used to produce cement. And we also save the energy costs”</p> <p>Less heat means lower cost and emissions, as James Stuart, a sustainable design consultant, explained: “In ordinary cement, they have to use very high temperatures, up to 1,400-1,500 degrees Celsius in order to turn limestone into cement. That is part of the process. And that takes an awful lot of energy. Here we only need bacteria to multiply at 30 degrees. So that is a massive difference. And that amount of heat energy is saved because we are using a biological process to bind the particles together”. </p> <p>The way the bacteria bind the particles together is by naturally producing calcium carbonate. </p> <p>Initial tests have proved promising. Researchers – microbiologists and chemists – are working to help the bacteria become more efficient. </p> <p>“It’s important to know the ideal density of bacteria in the mix,” said Linda Wittig, an industrial chemist with Fraunhofer-<span class="caps">IFAM</span>.</p> <p>“We’ve done research on that. We know for instance that greater bacteria density does not always mean that the product will be more resilient. On the contrary, sometimes beyond a certain point, too many bacteria can undermine the strength of the final product. So we need to find the optimal number of cells to produce the cement”. </p> <p>Preliminary results of ongoing tests on the material’s plasticity, elasticity and resistance to stress or deformation are already showing the way for eventual applications. </p> <p>“We decided to use this material as mortar and not as concrete because it is not as strong as traditional concrete. But it can be easily transformed. This is the reason why we decided to use this material as mortar,” said Nikos Bakas, a civil engineer at Neapolis University in Greece. </p> <p>Whatever the final applications, researchers hope the new material could be a reality on European construction sites in less than a decade.</p>

Do you know: can bacteria build houses?