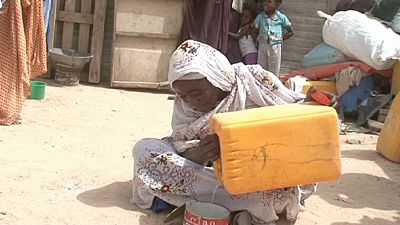 <p>Nouakchott, the capital of Mauritania, is a town built around a well of the same name, where camel herders used to go and water their flock. </p> <p>Today, it suffers from a serious water problem, as Sidi Al Moktar Sheiguer explains: “You know, our city is in a basin. It’s below sea level and the smallest tsunami would, quite simply, totally flood the capital. Nouakchott has no pipeline, no sanitation system or diversion for trickling sewage water. And that water has to find a place to stagnate, which it does underground before surfacing here, for example.”</p> <p>The used, stagnant water can be found in several places. The lack of sanitation ducts causes it to resurface, resulting in serious problems in terms of pollution and providing the perfect breeding ground for malaria mosquitoes.</p> <p>“But one of the biggest threats is the advancement of sand dunes. Here there are dunes which can bury entire districts of the city,” adds Sidi Al Moktar Sheiguer.</p> <p>The lack of water means the city has few trees, which would act as a buffer to desertification and the advancing sand. </p> <p>But in a better off area of town, the water problem is less severe.</p> <p>Journalist Mohamad Memine shows us an example of “how the other half live”: “As you can see here, we have running, drinkable water. It comes through a pipeline, originating in a river in Senegal. This is how it is in the so-called ‘well-off’ parts of the town. In this area, the water problem – apart from winter floods – is basically solved. But in another district, it’s an entirely different situation,” he says.</p> <p>We visit the poverty belt of the city, where the most destitute live in informal, provisional settlements, deprived of sanitary facilities and fresh water. They are forced to resort to another drinking water supply system.</p> <p>“We have nothing,” says one local woman. “We buy water from street carts. We don’t have pipes, taps, anything… Nothing at all.”</p> <p>A water supply can be found several kilometres away from the settlement, built with the help of the European Union. People go to buy water by the barrel or by the container and carry it home on the back of a donkey or on carts. Some people have made a career out of it.</p> <p>One water vendor outlines his prices: “We sell the water at around 14 euro cents a barrel and they sell it on to the consumer at around 57 cents,” he explains. “We sell a container for 3 cents and the resale value is double that, at around 6 cents.”</p> <p>Those living nearby go directly to the vendor to buy their water: “Here, 20 litres of tap water sell for around 6 cents. We both drink and wash our clothes in it,” one consumer tells us.</p> <p>All day long, the streets of the city are filled with carts supplying drinking water. </p> <p>In order to live decently, a person needs 50 litres of water per day according to the World Health Organisation. </p> <p>In Nouakchott, like in many other cities in Africa, daily water consumption stands at less than 20 litres per person.</p>