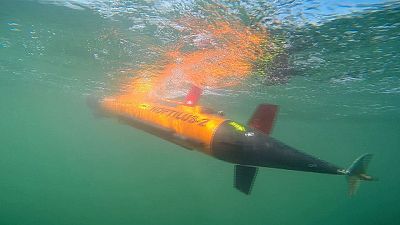 <p>Underwater robots can explore seas and rivers, gathering in groups to solve problems together, if they learn to cooperate.</p> <p><strong>How can we teach robots?</strong></p> <p>Engineers in the Portuguese town of Porto are working on <span class="caps">SUNRISE</span>, a European research project developing drone submarines, which talk to each other using sound signals.</p> <p>Computer Science Professor Chiara Petrioli is the project coordinator: “What you see here are underwater robots that are able to communicate and cooperate with each other, creating the so-called ‘Internet of underwater things’,” she explains. “It’s a novel concept that allows different devices, such as sensors and robots, to exchange information. This opens up new ways to monitor our oceans, lakes and rivers.”</p> <p>A group of robots – each carrying a particular set of sensors – will scour the seabed looking for a lost object or a chemical leak. By working together, they can collect a lot of information in a short space of time.</p> <p>Ricardo Martins, a researcher in embedded software, explained how the robots communicate with each other.</p> <p>“The acoustic communication is very similar to how humans speak,” he says. “The vehicles talk to each other underwater, using a range of frequencies that goes from the frequencies produced by our voices to the inaudible acoustic spectrum.”</p> <p><strong>What can robots see underwater?</strong></p> <p>The submarines transmit data to a control centre on the ground. Their exact position and some environmental factors – such as the temperature and chemical composition of the sea water – are then displayed.</p> <p>Roberto Petroccia is a computer science researcher. He explains how the drones are controlled: “Several vehicles operate in the area at the same time and we control them all from this centre. We give them instructions like ‘Move from point A to B’, and we monitor their movement almost in real time,” he says. “We use an acoustic channel when they’re underwater or radio when at the surface.”</p> <p>Their waterproof casing allows the submarines to dive to depths of up to a hundred metres. Depending on the mission, they can be configured differently to collect, record and transmit various types of data, as Ricardo Martins outlines: “Along with the acoustic modem that allows the submarine to communicate underwater, it has environmental sensors, a computer system that allows it to navigate underwater, batteries that keep it going for eight hours and modules for radio and satellite communication.”</p> <p>Crucial for search and rescue operations, an on-board sonar device finds sunken objects by emitting pulses of sound and listening for echoes. It has already helped to find a lost container in the port of Porto.</p> <p>Lino Antunes, head of the emergency department at Porto’s port operation and security base, speaks of the use of such devices: “They are useful for three main applications: first, for port security. Second, for environmental monitoring, which is very important to us. And third, for inspections of the ships that dock at the port,” he says.</p> <p>From oceans to rivers, mini-submarines work wherever it is too risky – or too expensive – to send human divers. The new technology should give us a better understanding of the silent world, as <a href="http://fp7-sunrise.eu" rel="external">SUNRISE</a> coordinator Chiara Petrioli explains: “From the discovery of underwater volcanoes and archeological sites to the protection of our coasts, infrastructure and ports – this technology will give us a much deeper understanding of our world. And that’s an essential element for the future of humanity.”</p>