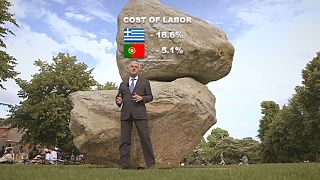 <p>Over the past year, Real Economy has looked at everything from bailout exits to the banking union, explaining the economic elements that you should know about – like <span class="caps">GDP</span>, inflation and unemployment.</p> <p>The programmes have focused on the economic issues that impact our everyday lives across 28 countries, highlighting just how important Europe’s economic health is, not just to you, but the world!​</p> <p>As the current season ends, Maithreyi Seetharaman and the Real Economy team ask have things got better during that time? </p> <p>They analyse strategies for future growth, hearing the sometimes divergent views of some of the programme’s leading guests over the year.</p> <p>Guntram B. Wolff, Director of the Bruegel European think-tank, explains the economic situation is a bit better than last year but the recovery is very shallow, with high unemployment and and low job creation. </p> <p>He also gives an opinion on what the European Central Bank should do about low inflation, how government debt restructuring should be addressed, and the fragility of the banking system.</p> <p>We hear from Johannes Hahn, EU Commissioner for Regional Policy on the need for research and innovation activities; Jeremy Rifkin, President of the Foundation of Economic Trends, on the third industrial revolution and Jim Hagemann Snabe, one of the bosses of software firm <span class="caps">SAP</span>, on the transition into the digital age. </p> <p>Also featured are former <span class="caps">MEP</span> Sharon Bowles; Lazlo Andor, the EU Commissioner for Employment, Social Affairs & Inclusion; Sandra Polaski, Deputy Director General of the International Labour Ogganisation; Olli Rehn, EU Commissioner for Economic & Monetary Affairs; Peter Praet, Chief Economist with the European Central Bank, Jean-Claude Trichet, former President of the <span class="caps">ECB</span>; Emma Marcegaglia, the head of Business Europe and Angel Gurria, Secretary General of the <span class="caps">OECD</span>. </p> <p>For all that watch the Real Economy video.</p>