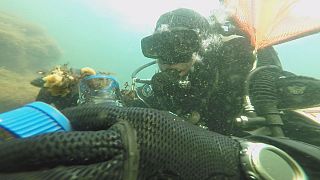 Over 99% of the microscopic inhabitants of the world’s seas have still not been scientifically studied, even though many of them might be useful to treat cancer and other human diseases. In fact, there are so many unexplored species that it is hard to even estimate how much we still do not know about them.

Algae and sponges carry microorganisms that protect them from environmental threats. Johannes Imhoff, a marine microbiologist at the GEOMAR Helmholtz Centre for Ocean Research Kiel, said: “Up to 40% of a sponges’ biomass is bacteria and fungi, representing a large bio-diversity of microorganisms which we can isolate in the lab to produce bioactive compounds.”

To turn them into medicine in the lab, researchers culture a fungus from the sample. The fungus naturally produces biochemical compound that could kill other cells – such as cancer.

Antje Labes, a marine biotechnologist working on the project, explained: “We have to recreate the right conditions in the lab for these microorganisms to produce the compounds we need. They need the right temperature, Ph values, nutrients and biological environment.”

Spectrometry focuses on compounds that have not been studied yet. If they have bioactive properties, they could be used in medicine.

Jan Oesterwalbesloh, a pharmacist with the project, said: “Fungi can be very beneficial for health. Penicillin is perhaps the best known example, but there also are some strains of marine fungi which are active against cancer cell lines.”

To test for bioactive properties, isolated compounds are mixed with live cancer cells and an indicator liquid changes its colour from blue to pink if the tumour cells die.

So far, researchers have isolated hundreds of new fungal strains, screened thousands of extracts and sequenced three genomes, narrowing a selection of candidates for future clinical studies. Johannes Imhoff is optimistic about what this could mean for the future: “If you look back few decades, cancer was a major threat to humans. But today we are developing new approaches to treating cancer. We can use proven methods, and we keep improving them and I think we’re going to make a lot of progress in the coming 10-20 years.”

Do you know: can the sea cure cancer?