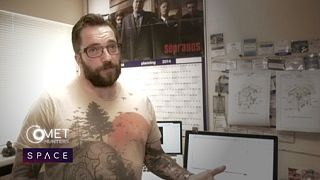 <p><a href="http://www.esa.int/Our_Activities/Space_Science/Rosetta" rel="external">Rosetta</a> is now under four million kilometres from its target comet, and closing fast. At <span class="caps">ESA</span>’s base in the Netherlands mission scientists Matt Taylor and Fred Jansen are planning the science. </p> <p>“What we’re doing from a scientific point of view is now looking at the longer term, to see what we’re going to do once we’re at the comet,” says Taylor.</p> <p>“This year we’re also looking to identify where that lander will go down, where’s the best point to put that lander.”</p> <p>For Fred Jansen, the Rosetta Mission Manager, the thrill of the little-known comet only adds to the excitement: “What is really exciting here of course is the target, we don’t know it even, so everything that we prepare now, one single whim of the comet and it could be thrown out of the window.” </p> <p>Such is Matt Taylor’s devotion to the cause he proudly wears tattoos depicting key <span class="caps">ESA</span> projects: “I had a tattoo done of a previous mission I was working on so of course I had to have one done of Rosetta.”</p> <p>So what’s Matt’s message to Rosetta? </p> <p>“Hi Rosetta, you’ve done well, you’ve come out of hibernation. No more sleeping. ‘It’s on like Donkey Kong’ – let’s do some science,” he tells her.</p>