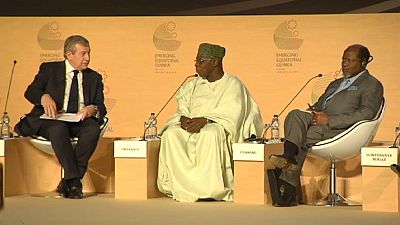 <p>Equatorial Guinea’s President Teodoro Obiang Nguema has called on international investors and financial institutions to help open up and diversify his country’s energy-dependent economy. </p> <p>At a recent international conference in the capital, Malabo, the president shrugged off the country’s poor human rights record, insisting the nations oil and gas wealth was a ‘‘blessing and not a curse’‘. </p> <p>Nevertheless, despite such attempts to woo foreign business and shed its image, Equatorial Guinea continues to suffer a bad press, especially in the West. </p> <p>Speaking from Malabo euronews correspondent Francois Chinac said: ‘‘According to a recent report by the United Nations, most African countries will see higher economic growth compared to the global average in 2014. But big disparities persist, for instance here in Equatorial Guinea where <span class="caps">GDP</span> per capita is the highest in Africa, but the country still remains very low on the UN’s human development index. in 136th place.’‘</p> <p>In the mid 1990s Equatorial Guinea struck oil. Despite the country’s widespread poverty, some businessmen like Michael Lamaswala, the <span class="caps">CEO</span> of Blue Square Oil & Gas Limited, believe it is only a matter of time before the country’s riches filter through to the rest of population. </p> <p>“When you look at European countries, we all know European history and the time it has taken. A lot of changes have had to come through. In Africa, relatively speaking, that development, if you look over the period of time, from colonisation to now, it has been quite rapid, and it has moved very quickly. So, in a country like Equatorial Guinea, countries like Nigeria, with the administrations that are in place, they try to insure now that that wealth filters downwards by inviting foreign direct investment and by also trying to insure the empowering of their citizens. With the mineral wealth that they have, now that they are trying to exploit mining, companies such as ours coming in, what they can then begin to see is a better education for that population, as a population comes more educated, they become better off as well”.</p> <p>A host of <span class="caps">NGO</span>s, however, including Human Rights Watch, accuse the country of having one of the worst human rights records in all of Africa. In addition, it is claimed a tiny elite are pocketing the small nation’s oil riches, leaving the vast majority of the country’s people living in extreme poverty. </p> <p>Despite that, some in Malabo believe they see a new spirit of openness. </p> <p>“The message we are receiving from the government here, after this fantastic conference, is really that they are willing to take the steps and to do the right thing. If you are a hit and run investor Africa is not a place for you, because it will take time. So, I would say that serious investors who are really looking for the developments – social economic development of the country – as well as their own profit, of course, well they should be here because this is the place,’‘ said Michele Carlsson, Head of Business Development, in the Middle East and Africa, at Nasdaq <span class="caps">OMX</span> Group.</p> <p>But critics claim getting accurate analysis of Equatorial Guinea’s real economic and social situation remains a huge area of concern. </p> <p>Transparency International has put the country in its top 12 of most corrupt states. </p> <p>Even the government admits its failure to provide proper data is a problem. </p> <p>Equatorial Guinea’s Finance Minister Marcelino Owono Edu told euronews: ‘‘We are a country that is starting from scratch. We need to develop and we’re doing it bit by bit. One of the government’s priorities now is to develop the country’s human resources. That means better education and health. This year 35 percent of the government’s budget will go on social spending.’‘</p> <p>Currently Equatorial Guinea is Africa’s third biggest oil and gas producer. </p> <p>The government insists diversifying the economy remains one of its key priorities. </p> <p>‘‘In addition to improving infrastructure, the country is committed to diversifying the economy to achieve its development targets. Because in the future the main growth will come from Africa, notably Central Africa. What we are looking at today is to achieve a lasting sustainability which will also enable us to attain our development goals,’‘ said Lucas Abaga Nchama, Governor, Central Bank of Central Africa. </p> <p>The hope is foreign investment in non-energy sectors such as farming, mining and tourism will not only help place the country on a sustainable economic path but also go some way to improving the sub-Saharan African country’s tainted international image.</p>