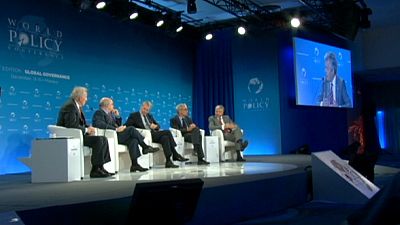 Montecarlo, in the Principality of Monaco, hosted the sixth edition of the World Policy Conference (WPC). Debates and workshops were centred around the main crises currently affecting the world.

Around 300 politicians, businessmen and representatives of international organisations gathered to develop a geopolitical and economic analysis of all the regions of the world.”

The conference was officially opened by Prince Albert II. On the first day attendees received the news that the Iranians had left negotiations on their nuclear programme, after the US decided to extend sanctions.

“With such a sensitive issue I expect, of course, there to be regular crises and departures,” Reynders explained. “But I also expect there to be a return to the table. I hope first that we do everything possible to get all the partners around the table again, because the Iranian crisis is probably, in geopolitical terms, the most sensitive crisis today for world security.”

“We plead that every sovereign nation has the right to own and use nuclear technology for peaceful purposes,” said Babacan. “But, as Turkey, we’re against nuclear weapons, we’re against weapons of mass destruction in our region and beyond.”

The Syrian crisis, as well as the decision by the US and UK to stop the supply of arms to the rebels, have been debated at the conference.

“I’ve never been in favour of supplying weapons, as long as we don’t have a very clear idea of who will use them,” he said. “There is much confusion today in Syria. We need to be very careful about the supply of weapons and support that we can give but, at the same time, do our best to bring all the partners to the table”.

The European Union is also experiencing a geopolitical crisis, with Ukraine’s refusal to sign the association treaty and the huge demonstrations in Kyiv.

Founder and President of the WPC, Thierry de Montbrial, believes an agreement is in sight.

“I think, at some point, there will be an agreement with the European Union. But there must also be an understanding on the part of the EU – it must be able to honour its commitments. Keeping an open discourse on Ukraine is fine, but does the European Union really have the will and the means to heavily invest, even economically, in Ukraine? I’m much less certain about that.”

For Europe, the economic crisis has, first and foremost, caused a social emergency; with high unemployment in several countries, especially among young people.

European Commissioner, Joaquín Almunia, talked us through a European strategy for employment.

“We’ve approved a strategy for helping European countries with their employment policies,” explained Almunia. “For example, a job guarantee for young people. The European Commission also manages contributions by the Member States and has decided to invest six billion euros over the next two years to support specific programmes for youth employment.”

Cyber security and privacy protection is another huge issue, that for Europe could affect not only ethical matters but also its economic competitiveness.

Euronews correspondent, Giovanni Magi, summed up the main points of the conference.

“There are no simple solutions to the many international emergencies. Diplomacy, dialogue and democratic confrontation remain, according to most opinions, the way to move forward.”