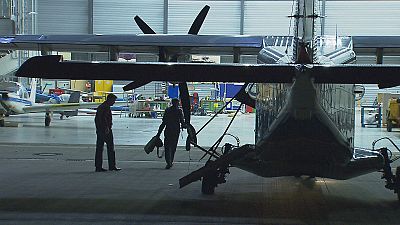 <p>Better aerodynamics can make an airplane more reliable and environmentally friendly. But how can we measure the air flow around the aircraft during a real flight? That’s the challenge facing experts at the <span class="caps">DLR</span> aerospace research institute in Germany. </p> <p>In a research hangar at the German aerospace centre, planes are equipped with experimental tools and devices that need to be tested during a real flight. It is not as straight-forward as wind tunnels and scale models, but the data provided by real flights is much more accurate.</p> <p>Christina Politz, head of a specialist measurement research unit at <span class="caps">DLR</span>, showed Euronews some of the key facilities: “Here, we’re in the flight operation centre. What you see here are several aircraft used as test platforms for various kinds of research projects that involve various partners.”</p> <p>Christina is in charge of a series of flights that are part of a European research project to improve optical measurement tools. The team has set up a powerful laser that zaps the clouds, allowing the cameras to photograph water particles during the flight. Surrounded by instruments, Hauke Ehlers, a researcher in particle image velocimetry, explained how the process works: </p> <p>“Here we’re in the plane, and on my right side you can see a laser, which creates a light sheet parallel to the aircraft during the flight. And here you can see two cameras – they’re set in a stereo configuration, watching the flow of cloud particles, illuminated by this laser. And the third camera measures the size of the particles.”</p> <p>This technology, known as “particle image velocimetry”, allows us to see with high resolution how any modification affects the aerodynamic qualities of the plane.</p> <p>“This is where the laser beam comes from, pointing in the flight direction across the field of view of two cameras. The cloud particles, which we’re observing and whose motion we’re capturing, scatter the laser light, and the cameras record the image, from which we can derive velocity vectors,” Christina explained. </p> <p>The weather conditions need to be favourable for the tests to succeed, according to research plane pilot Peter Baumann: </p> <p>“For this flight, we need clouds to cover a large area rather consistently. It shouldn’t be too windy, so our flight characteristics can remain constant. Even though we need the clouds, it shouldn’t be raining – too much moisture isn’t good for the sensors. So tonight it’s going to be a bit difficult to find the perfect spot in the sky – we’re going to search for some time.”</p> <p>As soon as the plane reached the clouds, researchers turned on the laser and the high-speed cameras started taking pictures. As the plane ploughed through the clouds, Christina described what was happening: </p> <p>“The tiny white particles here are actually the cloud droplets we’re seeing with our cameras aboard the aircraft. They’re sent to computers, and, based on this data, we can analyse the motion of the particles and derive their velocities.”</p> <p>After around 90 minutes in the air, the plane returned to the hangar. Inside, special software revealed the structure of the airflow from the recorded movement of individual particles.</p> <p>“It is very important for the aircraft industry to know the exact aerodynamic around the plane – that’s why the industry is hugely interested in the technology which we’re developing in this project, the particle image velocimetry,” said Hans Elkers.</p> <p><a href="http://aim2.dlr.de">http://aim2.dlr.de</a></p>