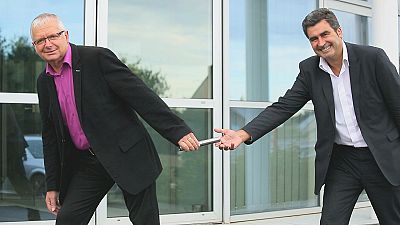 Every year, there are around 450 000 business transfers in Europe. It’s a vital process for businesses, but around a third don’t survive it.

One of the methods which works, however, is the creation of a cooperative: when employees buy the business.

In 2004, 25 years after he created his business, Jean-Paul Haspot decided to sell it. But the potential buyers intended to outsource some services – an idea he didn’t like. He therefore decided on the creation of a cooperative. That’s how his former production manager became the managing director of the company.

He said: “I went looking for a leader. It was fundamental for the success of the project. I put up a third of the price myself, and I stayed on for two and a half years to make sure it was working.”

80% of the employees voted for a cooperative to take over the business, and they each put a minimum investment of €1,500 into the company.

Loïck Anger, the new CEO of Besné Mécanique, explained: “From the beginning it was a healthy company. And since the take-over we have doubled our turnover, so that today we make around 10 million euros a year. We have also doubled our staff numbers, so now we employ around 100 people. And all that during an economic crisis!”

This may be a cooperative, but for all that, it’s a real business with a solid business plan and real profit targets.

Loïck Anger said: “Our model isn’t auto-management. We have a steering committee which works out the company’s strategy. Then we approve it with the management board.”

Today cooperatives account for 5.4 million jobs in Europe, a figure which is constantly growing. The Union of Cooperatives in Western France helped the workers prepare and carry out the transition, and still provides advice. Their experts have carried out several audits, and helped the company’s various boards and committees to draw up new business plans.

Marie Brentot from the Union of Cooperatives in Western France: “Transferring a business to the employees cuts the risk of failure in half. It means preserving company know-how, and it reassures clients, partners, and of course, the workers involved in the project.”

This organisation, therefore, worked directly with the employees to get the message across and to give them all the keys in order to understand the system properly.

Marie Brentot said: “We teach the employees to become co-entrepreneurs in the company, through training. For example, how to read an accounts conclusion, understanding the legal status of a cooperative. This enables them to take part in collective decisions about the business.”

Jean-Paul Haspot said: “For me, the keys to success are: sufficiently long-term support, a strong and unchallenged leader; lots of communication; saying what we’re going to do; and doing what we said we would.”