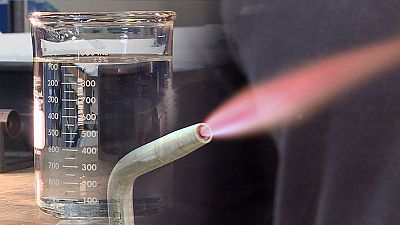 <p>A portable device that makes fire from water has been developed within a European research project. It doesn’t use flammable gases, it produces its own fuel as needed.</p> <p>Andrew Ellis, a research technologist with <span class="caps">ITM</span> Power, explained: “This is an electrolyzer system we’ve got here. It’s been developed to use a standard mains electricity supply, and water. The water is split into hydrogen and oxygen gases and fed into a torch where a flame is produced, which can then be used for brazing or any other industrial application where flame is used. So it’s just using water to make a flame, basically.” </p> <p>Traditionally, the use of electrolyzers has been limited by the high costs of membranes and of catalysts requiring platinum or other precious metals. The researchers wanted to make this technology more affordable.</p> <p>Andrew Ellis said: “We’ve got a whole team of chemists working on new formulations of membrane, which have shown increases in the performance of the electrolyzer. We’ve also been doing lots of research on catalysts, trying to reduce the amount of platinum and looking into much cheaper materials that can be used in the cells. And this research has led to big reduction in the cost of electrolyzer systems.”</p> <p>Hydrogen and oxygen are recombined at the very tip of the torch, creating a flame that is cooler and much easier to handle than commonly-used mixtures of oxygen with propane or acetylene.</p> <p>Rory Olney, a welding consultant, said: “You can see from the flame that it’s a lot softer compared to something like an oxy-acetylene flame. There’s no actual hot spot just off the tip of the nozzle, so glare from the flame is a lot less aggressive on your eyes. So you see I’m just wearing clear goggles.”</p> <p>Pressurized bottles containing acetylene are dangerous and inconvenient. Their use is banned in locations where gas leakage could be too risky. And the hot oxyacetylene flame requires extra care when working with sensitive metals such as aluminium.</p> <p>Steven Baines, a specialist in materials and joining, and the <span class="caps">TWI</span>/SafeFlame Project Coordinator, said: “We have high temperature, high velocity, which can melt the workpiece very quickly, and that’s one of the principle downsides.”</p> <p>Hydrogen-based flame is more gentle, and cleaner too, because it only produces water when it burns.</p> <p>Nick Ludford, a materials scientist with <span class="caps">TWI</span>, said that compared to acetylene gas, they anticipate that the cost of the gas in their new unit would be at least 20 times cheaper than acetylene – because of the absence of expenses like gas storage, insurance, and transport.</p> <p>Small and medium-sized enterprises will be able to assess these advantages in the near future when the technology is expected to become commercially available.</p> <p>Right now, the prototype electrolyzer system is being thoroughly tested by welding professionals in the UK.</p> <p>Rory Olney said: “One of the main benefits of this torch, this system, is that the torch always remains cold because the flame, as it’s being produced, burns on the outside of the torch. So it’s cold to touch, and as I’m using it, the torch never gets hot. And when you turn the flame off at the [end] of operation, the torch will also remain cold afterwards, so you can put it down anywhere you want.”</p> <p>For more information, see <a href="http://www.safeflameproject.eu">www.safeflameproject.eu</a></p>