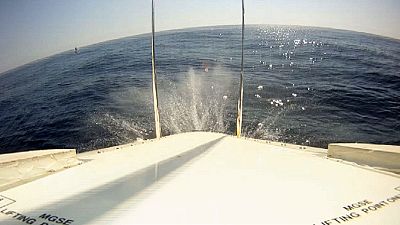 <p>Europe’s newest spacecraft, the <span class="caps">IXV</span>, or Intermediate eXperimental Vehicle, has moved a step closer to its planned launch in 2014. </p> <p>The craft completed a pre-launch test off the coast of Sardinia, which involved it being dropped into the Mediterranean from a height of 3,000 metres.</p> <p>For the most part the vehicle performed perfectly during the test, with parachutes deploying as expected. However, just after splashdown a problem arose, as the inflatable devices which should add support to the buoyant <span class="caps">IXV</span> once it is in the water had failed to inflate. </p> <p>It was a dramatic and initially confusing result, but after some head-scratching the engineers involved in the test began to understand what had happened. They believed that the balloons had not inflated because the setting for the sensors that detect the impact with the water was too high. So, splashdown was quite simply a little too gentle. </p> <p><span class="caps">IXV</span> Programme Manager for <span class="caps">ESA</span>, Giorgio Tumino explained: “There has been a lot of discussion around this, because we have to differentiate the shock induced by the impact with the water from the shock that could be induced by wind gusts to the parachute, because these are very similar levels in terms of shock and we have to differentiate those levels. We had set these thresholds quite high, and while my impression, my visual impression of what happened was that the landing was very soft because the parachute is really working fine, so probably the impact loads were much lower than what we expected.”</p> <p>Roberto Angelini from Thales Alenia Space was happy with the test overall: “We demonstrated what we wanted to demonstrate; free fall condition initially, you see the parachute compartment where we had the extraction of the parachute system. The slings of the parachute that are covered by a thermal protection system to sustain the heat of the re-entry, we wanted to test how this thing was going to be broken. And you see here the flotation devices that are activated right after the splashdown itself. Now, if there is something we will have to fix coming out from the post review board etc we will implement it in the flight hardware.”</p> <p>A post-flight review confirmed Tumino’s theory. The impact loads during splashdown were lower than expected – the computers recorded an impact deceleration of 29.1 m/s2, and the threshold for the flotation of the balloons was set at 30 m/s2</p> <p>A lot is riding on the <span class="caps">IXV</span> prototype, as it represents a new chapter in space flight technology for the European Space Agency.</p> <p>The idea is to have an affordable, small spacecraft that can enter near-Earth orbit and then land in a targeted zone. This test was just one step in that development. In 2014 the <span class="caps">IXV</span> will be launched into space on board a Vega rocket and then re-enter the atmosphere, splashing down in the Pacific Ocean.</p>