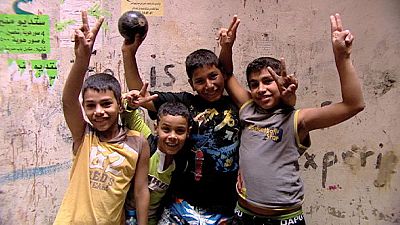 <p>Amid Syria’s ongoing civil war, Palestinian refugees find themselves uprooted once more.</p> <p>85,000 have fled from Syria to Lebanon. </p> <p>Their families were displaced after the creation of Israel in 1948.</p> <p>Many now live in one of Lebanon’s 12 camps for Palestinian refugees, like the Shatila camp in Beruit. </p> <p>This slum-like ghetto was the scene of a bloody massacre in 1982, when an estimated 3500 people were killed by a Christian militia during Lebanon’s own civil war. </p> <p>Sawsan (not her real name, she did not want to be identified), is a mother of three from Homs. She told euronews why she decided to leave her hometown: “My husband first came to Lebanon to work. The economy in Syria no longer exists. There is no country anymore. Despite the difficult circumstances that we face here, we have no choice right now.”</p> <p>Sawsan’s grandparents came from Haifa and Jaffa; two cities that are part of the modern-day state of Israel. After 1948, one half of Sawsan’s family settled in Lebanon; the other in Syria. She wants to return to Homs when the fighting stops:</p> <p>“If you really want to know the truth, when the situation in Syria improves, so will ours too. Because our future is over there. We want the future to be better for our children. I love Syria and Palestine”</p> <p>Refugees like Sawsan rely heavily on the support of the UN Relief and Works Agency, which provides housing and health care services. Such aid is vital in light of restrictions imposed by the Lebanese government, which, as Mahmoud Abbas, a youth worker in Shatila, explains, are trapping Palestinians in a cycle of poverty: </p> <p>“The Lebanese government deny the Palestinians their rights to work, to establish associations, to have free movements in and out of many camps in Lebanon. The Palestinians have no right to own a house out of the camps. This is the tragedy for the Palestinians. “</p> <p>Shatila was first built in 1948 to house 3,000 people. Today, 16,000 are crammed inside just one square kilometre, with no proper water or electricity supply. Abbas says international donors need to dig deeper: </p> <p>“This housing condition is not sufficient for rats, it’s not good for animals. You move through the camp and you find that it is not for human beings. Those United Nations who cry that they don’t have enough funds to support <span class="caps">UNRWA</span> they have funds to support weapons. Those people, those donors or those rich governments they have money for those people fighting on the borders with Syria, they have money for Bekaa and Akkar and they don’t find money to support these poor refugees with housing.”</p> <p>The Lebanese government believes there are more than 1million refugees from Syria now inside Lebanon. With no end in sight for the Syrian conflict, Beirut says it cannot cope with the large numbers crossing its borders. </p> <p>Abu Yamen, a 50-something father of six, made the journey from Damascus nearly one year ago. As he explains, he had no choice but to go: </p> <p>“I decided to leave because my children couldn’t stand it anymore. Three of my kids are university students. We suffered a lot from the bombings and air raids each day. We left with the shirts on our back, just some summer clothes. We rented a car and then we left.” </p> <p>But having arrived in Lebanon, things have not necessarily got any easier. The immediate threat of danger has been replaced with impoverished living conditions and suffocating restrictions. As he explains:</p> <p>“We don’t get any help here. I’m paying 250 dollars in rent a month here. I don’t work but I’ve been trying to find work. I’ve been to several regions in Lebanon but I found nothing…even as a driver. My children can’t work either. We are waiting on help from associations, charities, and hand-outs from the European Union…but we do not get anything.”</p> <p>Abu Yamen’s parents hail from what is now known as Kiryat Shmona, in northern Israel. As far as he’s concerned, his future is there, not in Syria:</p> <p>“We are in a disastrous situation. We want to go back to Palestine right away, tomorrow even! We want to go back to Palestine because we have land there, it is our home.”</p>