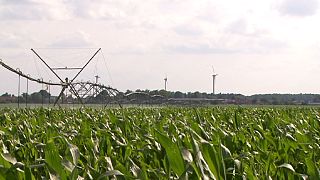 On a huge, 100 hectare corn field near Berlin, a unique research campaign is underway.

Here, researchers are mixing fertilisers with water and injecting the mixture into a prototype ‘fertigation’ system.

The system would allow farmers to fertilise and irrigate their fields at the same time, with continuous real-time monitoring of atmospheric conditions and the needs of the plants and soil.

Lucía Doyle Gutiérrez, a chemical engineer involved in the project, explained: “You have many different patterns to control, for example the rain, the light or the soil’s structure and its homogeneity. You obviously can’t control all of them, even to control a few is quite challenging.”

To achieve their goal, researchers have developed sensors than can read the levels of nitrates, phosphates, potassium and ammonia in the soil, which all help crops to grow.

The idea is to equip the system with the sensors and software it needs to be able to autonomously decide when more or less water or fertiliser is needed.

Martin Smolka, a materials scientist from the Vienna University of Technology, said: “We have to protect the sensors from any surrounding electromagnetic signals. It is also important to keep the sensors stable against any tilting – agricultural fields are very uneven. Finally, you have to make sure you can guarantee the supply of electrical power to the whole sensor platform.”

The sensors will then work together with data processors and a control and distribution unit. One of the main goals is to help farmers save water and fertilisers, but there are other advantages, as farmer Frank Hausman described: “A system like this can also help us farmers save time. We can control it via the computer from our office and, that way, we have more time for other things that are equally important to us. I hope the system will be successful. I’m very surprised at the situation and I’m happy that we have such good crops.”

The researchers also envisage other potential benefits to this intelligent integrated fertigation project. Peter White, a water management consultant revealed the details of that: “It is not good to spend a lot of time evaluating nutrition if your irrigation is appalling. So even if the aim is to save as much fertiliser as we possibly can, if the grower saves 20 euros in fertilisers per hectare but loses 30 euros per hectare in water irrigation, then he is not going to be very happy. But if he can save 20 euros per hectare and make a bigger profit, then he is very happy.”

“Currently, at the start of each season, farmers calculate how much fertiliser they need, and then during the season they add more fertiliser here and there. But there’s no control, they don’t actually know if the soil really needs that extra fertiliser,” said Lucía Gutiérrez. “This usually means that too much fertiliser is used, which could be polluting the soil and groundwater. With this automatic control system farmers can actually save resources, and it’s good for the environment.”

The research also involved small and medium sized enterprises, where irrigation systems are produced, sold and repaired. Speaking to Futuris, the manager of one of these companies said he believed automated fertigation platforms would soon be on the market. However, he added that farmers will never totally disappear from the fields.

“Research shows the irrigation and fertilization process is becoming more and more automatic” said Stefan Scholz, CEO of Hydro-Air GmbH. “It can be controlled from a computer; farmers will even be able to control it from their smartphones soon. Most farmers are keen for that. But we also have customers who still want to go to their fields, who want to manually control the system themselves.”

Whichever system farmers choose, the market is thriving: around 700,000 sprinklers are expected to be sold in Europe in the next 10 years.