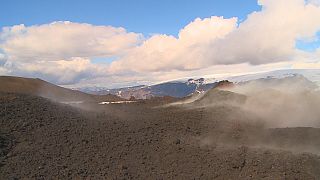 <p>Iceland’s volcanic belt has 35 active volcanoes. In 2010 when just one of them, Eyjafjallajoküll, blew its top European air traffic was paralysed for a month, at a very high cost to airlines. </p> <p>Iceland’s active volcanoes could erupt at any time, so European scientists are closely monitoring them. They want to better understand what happens before, during, and after an eruption.</p> <p>Freysteinn Sigmundsson, a geophysicist at the University of Iceland, and coordinator of the FutureVolc supersite project, explained their work: “We need to understand how to live better close to a volcano. Here in Iceland, it’s a part of daily life. Occasionally, like in 2010, there were serious consequences for many more people on Earth. In particular we want to learn how to mitigate the effects of eruptions and the threats from long term ash and gas transportation.”</p> <p>Different techniques have been developed. Scientists from the University of Florence have just installed an infrasound device in an Icelandic forest. In total, at the end of the year there will be four infrasound installations throughout the country.</p> <p>“A central station collects all the data and sends it through Wi-Fi. This data is received in Florence in Italy and it’s also sent to the Icelandic Meteorological Office in Reykjavik,” said geologist Maurizio Ripepe, from the University of Florence.</p> <p>When an eruption occurs, the pressure wave from the explosion enters the atmosphere. That is what the infrasound arrays pick up.</p> <p>“We are able with these infrasound sensors, and using the array, to detect pressure variations produced by a volcanic eruption at tens, even hundreds of kilometres. If the pressure is very strong we can detect it at thousands of kilometers,” added Ripepe.</p> <p>But the European supersite research project is not only about infrasound devices. There is <span class="caps">GPS</span>, a strain network, gas sensors, water flow for hydrological chemical dispersion, electrical field sensors, weather radars and ash fall meters.</p> <p>“In FutureVolc we have many researchers that have been working in Iceland and now is a time to combine all their expertise to provide more and better information of the status of the volcano. And then when we have an eruption, about the progress of the eruption and how much volcanic ashes is coming out of the volcano, because that is so important for aviation, to understand how they can fly safely,” said Sigmundsson.</p> <p>All the data from the different monitoring networks is analyzed at <span class="caps">IMO</span>, the Icelandic Meteorological Office, which despite its name is a natural hazards monitoring institute. Everything is done in real time 24/7 to warn civil protection services and air traffic control as early as possible.</p> <p>“To monitor the magma movements we use the seismic location of earthquakes. The <span class="caps">GPS</span> network shows the deformation of the volcanoes, whether they’re expanding, contracting, or if things are moving. We are setting up a database and a data service at <span class="caps">IMO</span>, the FutureVolc database. And it will enable people to access all this data from all these networks on the ground, and also to find ways to get data from satellites,” said <span class="caps">IMO</span> Seismologist Kristin Vjogord. </p> <p>All this data makes it much easier to monitor the Icelandic volcanic belt and it is also used for research which moves volcano monitoring to a higher level. </p> <p>Despite the disruption it caused, Eyafjallajoküll’s eruption in 2010 was very small. If the Katla volcano, the largest in Iceland, was to erupt the chaos in air traffic would be far more important, multiplying the economic losses for Europe. </p> <p>But with these new methods, and a better knowledge of volcanic crisis, a warning, even a short term one, is still better than no warning at all. These new data may prove vital next time. When the signs occur, the eruption is always imminent.</p> <p>“There could be an eruption in Iceland today, or next week, or next year, it is difficult to give any sort of a ‘medium term warning’ that says when a volcano will erupt,” concluded Sigmundsson.</p>