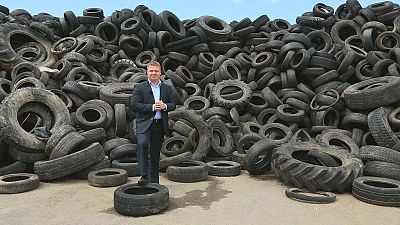 <p>Eco-innovation is a real opportunity for entrepreneurs. Eco-businesses employ a total of 3.4 million people across Europe. </p> <p>This week, Business Planet takes a trip to Croatia for a closer look at a very specific kind of innovation: noise barriers. </p> <p>The noise barriers being built along the motorway near Zagreb are spearheading innovation. They are 40 percent made of recycled tyres and are among the most efficient on the market. </p> <p>They are the result of a project launched in 2009 as part of the European Eco-Innovation programme. </p> <p>One of the companies involved in their production is an <span class="caps">SME</span> (small and medium sized enterprises) which recycles tyres, turning them into a powder used to build the barriers. It’s a great opportunity for innovation, according to the company’s chairman. </p> <p>“If we achieve the goals that were set, we’re hoping to hire up to 30 people and double our production capacity,” said Damir Kirić, the chairman of Gumiimpex.</p> <p>The powder is mixed with cement at another factory, where the noise barriers are moulded. </p> <p>Here, too, it is hoped the project will help hire an extra 60 people. </p> <p>“It’s opened up new doors. We’re hoping to increase turnover by 25 percent in Croatia, but also in neighbouring countries,” said the Managing Director of Beton Lučko, Danica Jelenić.</p> <p>It is a serious investment. Danica Jelenić put in 355,000 euros. She is delighted with the result. </p> <p>“Taking part in this project has really strengthened our position. We’re taken seriously by other players on the market,” she enthused.</p> <p>The European Eco-Innovation programme gives access to subsidies to launch a project. So far, it has backed 200 projects throughout Europe.</p> <p>The noise barrier project was born at Zagreb University. It is the brainchild of Professor Stjepan Lakušić. </p> <p>Half of the project was funded by the Eco-Innovation programme, which provided 500,000 euros. </p> <p>Now, the plan is to sell this innovative technology to neighbouring countries, where there is always a need for fresh ideas on how to recycle tyres. </p> <p>“You need 65 tonnes of recycled tyres to produce a kilometre-long barrier that’s one metre high. That’s 8,000 old tyres,” explained <span class="caps">RUCONBAR</span> Project Coordinator Stjepan Lakušić. </p> <p>This new technology has already attracted a number of potential buyers attracted by the low production cost. </p> <p>“Using recycled products brings down the cost by 10 to 18 percent compared to similar products on the market,” Stjepan Lakušić told euronews.</p> <p>The chairman of Gumiimpex, Damir Kirić, described his recipe for success: “For me, the keys to success are – developing products from recycled material, human investment and new technologies.”</p>