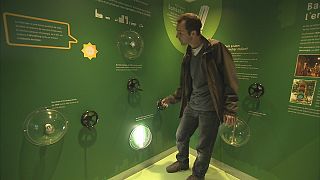 Right under our feet there is a source of clean and efficient energy. La Fabrica del Sol in Barcelona is living proof. An old Catalan building dating back to the beginning of the last century, it was recently converted to become a shining example of energy efficiency. The building uses vertical geothermal energy to heat it in winter and cool it in summer. But there’s no need for volcanoes with the Mediterranean sea right next door. Aniol Esquerra Alsius, an Industrial engineer at Ecoserveis explains the difference.

“People usually say we need to find something warm underground to heat the house, but it’s not the case here, because you do not need a volcano or magma under your feet. This is another system, a system which only needs to dig down 100 meters, that is deep enough. It is also cheaper and with a heat pump like the ones used for air conditioning we can use this thermal mass beneath the ground. There is this constant temperature underground to make thermal production more efficient.”

A big heat pump does almost all the work. Seven huge probes go underground. A powerful geothermal machine injects cold water into the probes which pushes the heat from earth, brings it to the machine, which it transfers to the distribution circuit. One hundred metres underground, the temperature is more or less constant. Scientists say it is a very efficient system.Dimitrios Mendrinos, Ground-Med project coordinator explains just how efficient it really is.

“Ground-Med demonstrates the technology of heating pumps which produce useful energy in the building with an efficiency of 5 : meaning that the energy provided for heating, cooling or hot water is 5 times more than the power consumption”.

The factory which designed and produced the heat pump for La Fabrica del Sol is found in eastern France
A European research programme aimed to develop heat pumps than can provide a factor of 5. However, all of this comes at a cost, and its higher than the classic geothermal system, at around less 10,000 euros per home.

Frédéric Bruyère, System Development Manager at CIAT explains the downside to the technology.

“It’s true that geothermal energy has a weak point, it’s implementation, because beyond the machine you have to drill into the ground and it is very tricky. Today, the idea is to reduce the waterflow in order to drive down drilling costs. But it is clear that with the increase of geothermal production volume units, costs will inevitably decrease in the future.”

At La Fabrica del Sol a solar captor with a fiber optic system allows sunlight into the room. The heat pump only delivers a third of the energy used to power the building. The other two-thirds are provided by a biomass boiler and the sun. A gigantic photovoltaic cell is mounted on the side of the building and on the roof there are helio-thermal tubes. Plants are also used to cool the building. All of this is on display for the public for a good reason. Anil Esquierra Alsius explains.

“The purpose of La Fabrica del Sol is to educate, raise awareness and demonstrate. Saying we believe in it, we have solar energy, we have biomass, we have geothermal energy. It’s more efficient when you show things in real life, people tend to believe you.”

The mission to promote vertical geothermal energy doesn’t stop in Barcelona. Seven other demonstration sites can be found in the EU. Harnessing the earth’s energy is no longer at our fingertips but under the tips of our toes.