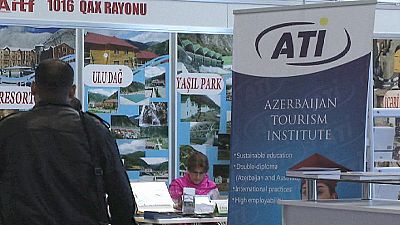 Representatives from 35 countries and over 250 organisations gathered at the 12th Azerbaijan International Travel and Tourism Fair, all aiming to boost trade in an emerging market. Europe remains the most visited region in the world but growth has slowed by around a half. France has suffered.

“The geo-political problems influence the number of tourists coming to France. The tsunami in Japan, for example, or the crisis in the United States of America after 2011. So such things can impact the numbers coming to France,” says Azbileg Incerto of International Promotion at Galleries Lafayette.

France is just one of several countries across Europe, whose tourist industry has been hard hit by a number of different factors. Think of a holiday amongst the ancient pyramids of Egypt. Tourism is critical to that country’s economy. Yet, in the last two years, it has been cut by 25 percent. That’s a big slice out of your daily income.

Reports of the protests in Tahrir Square and clashes in Cairo flashed across the world raised doubts in potential visitors’ minds. They have stayed away. It has proved a problem for other Arab countries too. Changing perceptions is part of the marketing strategy of Egyptian tourist chiefs. The pyramids and resorts on the Red Sea are far from troubled Cairo.

“We have a huge country and the distances between Sharm to Cairo are more like 500 kilometres, so maybe people who don’t know the geography of our country think that all of Egypt has demonstrations now,” says Nahid Hanna of the Egyptian Embassy in Moscow.

So how much of this tourism cake in Azerbaijan is available? It is a competitive business. Is it sustainable and what are the inherent problems?

One Greek company has proved how new markets can boost their trade. Since opening up links with Russia two years ago, numbers have increased by 30 percent. Next month, they will introduce direct flights twice weekly between Athens and Baku. One potential obstacle remains – anyone leaving Azerbaijan can only do so with a visa.

“We are part of the Schengen Agreement – an agreement most European countries have signed up to. So the procedures are the same for all countries. We will try to make it easier in the best way possible for people from Azerbaijan who want to travel to Greece to get their visas,” says George Papadopoulos, president of the Greek-Azerbaijani Chamber of Commerce.

Last year, 2.5 million tourists arrived in Azerbaijan while 3.2 spent their holidays outside the country. In this oil-based economy, tourism has a strong political will behind it and programmes are in place to develop what is viewed as a vital growth sector.

“Management skills in companies is a very important matter, that’s why we provide a better educational level. We have special international education programmes in the sphere of tourism and we consider it very important,” says Abulfaz Garayev, Azerbaijan’s Minister of Culture and Tourism.

It’s hoped the relationships forged at this exhibition will help build a sustainable tourist industry of mutual benefit to Azerbaijan and other countries.